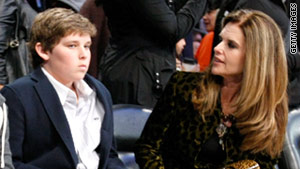 Los Angeles (CNN) -- Christopher Schwarzenegger, the 13-year-old son of former California Gov. Arnold Schwarzenegger and Maria Shriver, was hospitalized after a serious surfing accident in Malibu, California, over the weekend, a source close to the family said.

His parents confirmed the accident in a joint statement issued Friday.

"While it has been a very scary week, Christopher is surrounded by his family and friends," they said. "He is a brave boy and is expected to make a full recovery."

Schwarzenegger slammed face-on into an object on a beach and was seriously injured, said the source, who asked not to be identified because of the sensitivity of the matter.

He was initially treated in an intensive care unit but was later moved to another unit in the unidentified hospital, the source said.

"On behalf of our entire family, we want to sincerely thank the paramedics and lifeguards who responded so swiftly as well as the doctors, nurses, emergency room and hospital staff who have cared for our son," the family statement said.

Patrick, his 17-year-old brother, posted a Twitter message Friday morning indicating that Christopher is doing well in the hospital.

"Thank you everyone for your messages about my brother. This kid is strongest kid I ever seen. Keep praying," he said.

Christopher is the youngest child of the former couple.

Shriver filed for divorce from Schwarzenegger on July 1 after the revelation that he fathered a child with their housekeeper. The child was born less than a week after Christopher, according to birth records.