Rapper Da Brat is back after jail stint 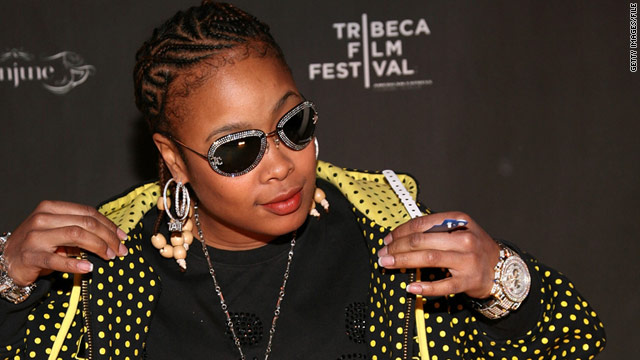 Da Brat, shown here in 2008, is out of prison after being sentenced for an assault in an Atlanta nightclub.
STORY HIGHLIGHTS
RELATED TOPICS

(CNN) -- In 1994, rapper Da Brat released "Funkdafied" which placed her in the record books as the first female rapper ever to have a platinum-selling album.

Year later, her career was put on hold when she was sentenced to three years behind bars for an attack on a woman in an Atlanta nightclub which left the victim permanently scarred.

Now Da Brat, whose real name is Shawntae Harris, has served her time and says she is a new woman.

Being away from friends and family (actress LisaRaye is her sister) for more than 2 ½ years has left her appreciative of the love she is surrounded with as well as her freedom, the former Jermaine Dupri protégée says.

She recently spoke with CNN about her hopes for a reality show, reviving her music career and how Mariah Carey and Nick Cannon shocked her while she was incarcerated.

CNN: So now that you have been back home for a little bit, are you getting back into the groove of the music industry and did you do any work while you were away?

But I'm getting back into the swing of things. I have a mixed tape out called "Life After Death" which you can find on Global14.com and I discuss my prison stint a little bit. A couple of the remixes I did are on there, including a remix of (the Chris Brown song) "Look At Me Now" and I am very happy and excited about it.

CNN: Did you purposely not work on music while you were in prison?

Da Brat: I just wasn't inspired really to write any music. Plus I had a portable CD player (laughs). It's not like being in the studio where the music is loud and you have good quality headphones.

CNN: Can you tell us about the book you wrote?

Da Brat: The book is pretty much about myself as a child, growing up in church and the different things I encountered like being in a gang and trying to sell drugs.

CNN: Is it a biography or is it fiction?

Da Brat: It's loosely based on my life. I'm doing it mostly so I can get a movie deal.

CNN: In your opinion, how has the music industry changed since you were gone?

Da Brat: Everything is the Internet now.

It's definitely not about selling CDs anymore. You pretty much do your own promotion now which is kind of cool, I kind of like it. I'm on Twitter as Only1Brat, I'm not on Facebook, but I'm on Jermaine's website Global14 all of the time.

It's almost like you cut out the middle man. I get to talk to my fans up close and personal and I've run across people I haven't seen since I was a kid going to church.

CNN: Fans of your sister's reality show (TV One's "LisaRaye: The Real McCoy") saw her interacting with you on while you were locked up. Any plans for your own reality show?

Da Brat: I'm working on getting one now.

The sad thing about it is most of these networks want the fighting, they want the drunkenness, they want the confrontational and that's not me anymore. I've outgrown that and I don't want that to be the main focus. Been there, done that and been through hell because of that.

I want to show people who I am, introduce them to my family, where I've come from, how I'm helping people with my charity work. I know it sounds boring, but with that comes with a lot and a lot of bumps in the road.

So I'm currently shopping for a deal right now.

CNN: You have very close family and friends, so who surprised you by coming to visit you in prison?

It was a shocker because the whole place was in an uproar. They must have called ahead because all of the officers and the warden knew. The whole compound put on their uniforms and it was a down day when we didn't have inspection or anything.

They called me and told me I had a visitor and I hadn't requested a special visitor so I was like "Huh?" Mind you, the person who came to get me was a lieutenant who up until then had been a complete a**hole towards me, but she was being all nice.

They told me to go into the warden's conference room and when I came around the corner I saw Mariah's manager. My knees buckled and I almost passed out. I couldn't believe she had come to see me.

She found a private airport that I didn't even know existed, flew her G5 in and came to see her BFF. I was really touched by that.