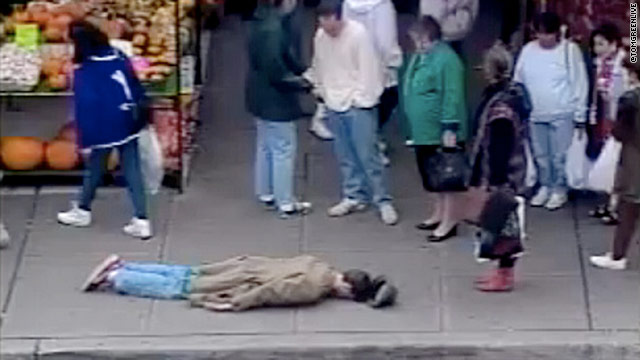 Los Angeles (CNN) -- Planking is a summertime sensation around the world, but new evidence emerged this week indicating the comedic practice is at least two decades old.

The practice of randomly lying face down and motionless for laughs apparently rose above the underground level only in recent months, with celebrities tweeting photos of their planking pranks.

While the trend appeared to emerge from nowhere, there is video evidence that it started as early as 1990 when comedian Tom Green was an 18-year-old rapper. Green planked three times during a segment on his rap group, Organized Rhyme, broadcast by the Canadian music channel Much Music.

The former MTV talk show host said he called it "Dead Guy" when he performed the stunt on his cable TV show in Ottawa, Canada, starting in 1994.

To prove his point -- and to claim his title as "Father of Planking" -- Green posted a clip of an early "Dead Guy" bit on his YouTube channel late Tuesday.

Competing claims have been made in other media reports that the craze began around 1997 in England or Australia.

"I don't want to take anything away from anybody, but I do have video evidence," Green said Tuesday.

"That bit never aired on MTV," Green said. "It is a very obscure piece of video." In fact, Green contacted Rogers Cable, the Canadian company that hosted his early non-paid show, to dig up the clip.

"The point of that video, we did a random, ridiculous thing and made a social comment with it," Green said. "Will people stop and help you on the street?"

A hidden camera captured the reaction of people on an Ottawa sidewalk eventually crowding around the motionless Green. He finally stood up and walked away after someone suggested calling an ambulance.

Green realized the "experimental" bit had great comedic value because "people were really, really laughing hard in the studio audience," he said.

Successful planking requires a person to keep their arms at their side, their nose on the ground, and no talking, Green said.

"The root of it, to me, is the absurdity of seeing someone lying there in the prone position as if they've died or passed out," he said.

Green, who moved his show to MTV in 1999, later became known for tormenting his parents by waking them up in the early morning hours with wild pranks -- and animals -- and painting their Ottawa home plaid.

The planking revival came to Green's attention only a few weeks ago when fans sent him Twitter messages recalling his earlier TV bits. He says he instantly recognized it as "Dead Guy."

"It's very fun for me to see people taking something that is so specific and so absurd and really so nonaggressive," he said. "It's interesting that something like that would catch on."

If Green is the true originator of planking, it would not be the first trend he has pioneered.

Green, who ventured into filmmaking after his MTV show, is now on the road as a stand-up comedian. The theme of his comedy now focuses on how the Internet and technology affect our lives and "not necessarily in a positive way," he said.