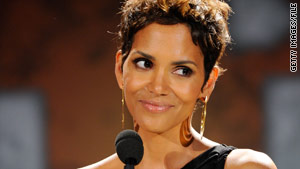 Los Angeles (CNN) -- A man who allegedly jumped a fence at Halle Berry's home twice last weekend and was prowling around her Hollywood Hills neighborhood Monday pleaded not guilty Wednesday to a felony stalking charge.

Richard Anthony Franco, 27, was arrested at Berry's home late Monday by off-duty police officers hired by the Oscar-winning actress after two intrusions into her property on Saturday and Sunday, according to Los Angeles police.

Berry, in a court filing seeking a restraining order against Franco, said police told her he "has a criminal history of violence, theft and drug offenses." He was "carrying a book with nonsensical ramblings and my name written in his handwriting" when he was arrested, she said.

A neighbor alerted the officers to the presence of a "possible burglar" at 11:15 p.m. Monday, according to the Los Angeles County District Attorney's Office.

The decision to charge Franco with a felony was announced Wednesday morning by the prosecutor's office.

Franco, who was already on probation for misdemeanor battery, could face up to three years in prison if convicted on the stalking charge, the prosecutor said.

Franco, a resident of Commerce, California, made an initial appearance in court Wednesday, where he entered his plea. The judged ordered him held in a Los Angeles jail on $150,000 bond until his preliminary hearing on July 27.

A temporary restraining order was also issued, banning Franco from coming within 500 yards of Berry or trying to contact her via telephone.

Investigators said Franco is the same man who intruded into Berry's yard two times last weekend. Both times he claimed he was "there to see somebody," but left after a Berry employee ordered him out, police spokeswoman Sara Faden said.

"Richard Franco is a stranger to me and I have no desire to have any contact with him," Berry said in her statement. "He has terrorized me and my family in three consecutive incidents over the last three days."

It's not unusual for photographers to stake out positions around Berry's Los Angeles home to get shots of the Oscar-winning actress, but investigators didn't know what this intruder was trying to do, Faden said.