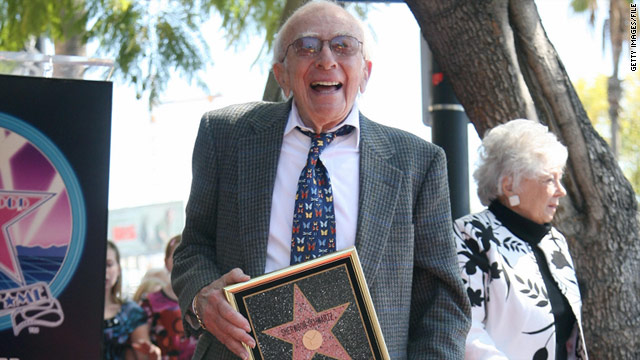 Sherwood Schwartz poses after been honored with a star on the Hollywood Walk of Fame in 2008.
STORY HIGHLIGHTS

(CNN) -- Sherwood Schwartz, the prolific television writer and producer best known as the creator of the iconic sitcoms "Gilligan's Island" and "The Brady Bunch," died Tuesday morning in Los Angeles. He was 94.

Schwartz's wife of 70 years, Mildred, confirmed to CNN that Schwartz had died after being hospitalized for an infection the past 10 days. She and the couple's daughter Hope Juber were with Schwartz when "he died peacefully" at about 4 a.m. (7 a.m. ET).

"He had a very good life," Mildred Schwartz said. "It's just too bad it had to come to an end."

Schwartz got his break in TV as a writer for "The Red Skelton Hour," for which he got two Emmy Award nominations, winning one. But he first left his most indelible mark by creating and producing two ensemble sitcoms: "Gilligan's Island," which aired for 98 episodes on CBS starting in 1964, and "The Brady Bunch," which aired on ABC from 1969 to 1974.

Neither show was among the most popular of its era, but both went on to enjoy much wider audiences in syndication, and Schwartz capitalized on their enduring popularity by producing numerous "reunion" specials, including "Rescue From Gilligan's Island" (1978) and "A Very Brady Christmas" (1988).

Schwartz was awarded a star on Hollywood's "Walk of Fame" in 2008, according to website IMDb.

"Sherwood was a wonderful writer and producer, but more importantly he was a wonderful husband, father, grandfather and friend," said Florence Henderson, who starred as mom Carol on "The Brady Bunch."

"His sense of humor never failed him and I always looked so forward to hearing his stories. They were endless and made you laugh so hard that tears would be running down your cheeks. Most of these stories were about the mishaps in his own life."

Henderson said that ever since she met him, in 1969, "I don't ever remember him losing his temper. Ultimately, he was a wonderful teacher in life and again, in death, he taught us how to leave with dignity and courage."

Along with his wife and daughter, Schwartz is survived by three children, eight grandchildren and four great-grandchildren.

The family is planning a private memorial for the end of the week.