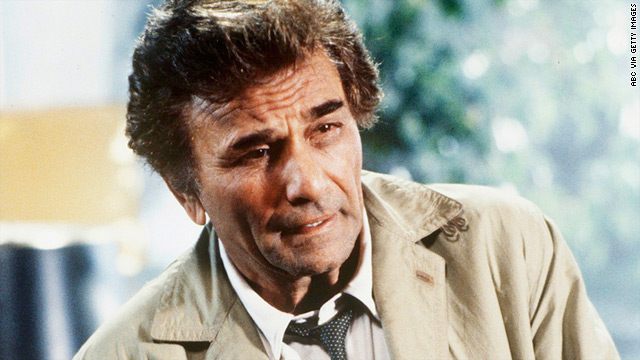 Peter Falk's best-known role may have been as the TV detective Lt. Columbo, but he also starred in movies and plays.
STORY HIGHLIGHTS

(CNN) -- Actor Peter Falk, who rose to fame on a shambling manner and a rumpled raincoat as the TV detective Lt. Columbo, has died. He was 83.

Falk died peacefully at his Beverly Hills home Thursday evening, according to a statement released by his friend, attorney Larry Larson. The cause of death was not released.

Though he was a renowned movie and stage actor -- he earned two Oscar nominations in the early '60s and won an Obie (an off-Broadway honor) for his performance in Eugene O'Neill's "The Iceman Cometh" -- he is best remembered for the polite, raincoat-wearing, Peugeot-driving Los Angeles police detective who always wanted to know "just one more thing."

That line -- which usually meant that the seemingly absent-minded detective was about to outwit his perfect-crime-committing suspects -- became so popular that Falk used it as the title of his memoir.

The character, which originated with "Columbo" writers and producers William Link and Richard Levinson, was given a unique spin by the actor.

"Before we ever had a script or anything, I was attracted to the idea of playing a character that housed within himself two opposing traits," Falk told CNN's Larry King in 2005. "On the one hand (he was) a regular Joe, Joe Six-Pack, the neighbor like everybody else. But, at the same time, the greatest homicide detective in the world. Now that's a great combination, and you can do a lot with that combination."

Time: A photo farewell to Falk

Peter Falk on what made 'Columbo' great
RELATED TOPICS

Falk first played Columbo in a 1968 TV movie "Prescription: Murder" and revived it three years later when the character became a regular part of the "NBC Mystery Movie," a series that also included Dennis Weaver's "McCloud" and "McMillan & Wife" with Rock Hudson and Susan Saint James. "Columbo" was the most popular of the "Mystery Movie" offerings, so much so that Falk was rumored to earn more than $250,000 an episode in the late '70s.

But Falk, who also starred in the films "The In-Laws" (1979), "Wings of Desire" (1987), "The Princess Bride" (1987) and several by his friend John Cassevetes, generally remained unimpressed with himself.

"I just keep working," he said. "I've never worried about the grand concepts. My philosophy is that I just try to get through the day," he told The New York Times in a 1990 interview.

Peter Michael Falk was born in New York City on September 16, 1927, and raised in Ossining, New York. After military service, he earned a master's in public administration and went to work for the Connecticut State Budget Bureau in Hartford as an efficiency expert.

"I was doing exactly what I was born not to do," he wrote in his memoir.

However, Hartford had a small theater troupe, and Falk immediately joined, which led to participation in other companies. Within a couple years -- while still working as a civil servant -- he was set to play Richard III at a summer workshop in Westport when, he says, a statement from acting teacher Eva Le Gallienne changed his life.

As Le Gallienne upbraided him for his chronic lateness -- he had to drive 45 minutes from Hartford every week -- Falk confessed that he wasn't really an actor. "Well, you should be," Le Gallienne replied, and that was enough for Falk to quit his job.

Soon he was a regular presence on the New York stage, earning raves for his performance as the bartender in "The Iceman Cometh." (One of his jobs, he recalled, was keeping the other actors awake during the 4 ½-hour play.) His work there and on TV led to an interview with Columbia Pictures head Harry Cohn. Cohn was concerned about Falk's glass eye, the result of an operation Falk had had as a child, and wanted the actor to take a screen test. Falk said there was nothing to talk about and refused.

"Young man, for the same price I'll get an actor with two eyes," Cohn retorted, according to Falk's memoir.

Falk's film breakthrough came in 1960's "Murder, Inc." in which he played gangster Abe Reles. The performance earned him a best supporting actor Oscar nomination. He earned another Oscar nomination for his performance in the next year's "Pocketful of Miracles," director Frank Capra's last film.

But it was "Columbo" that made Falk's name. The TV movie character, which succeeded a play and TV episode that included him, was originally offered to Bing Crosby, of all people. But "Der Bingle" turned it down allegedly because it would get in the way of his golf game, according to Tim Brooks' and Earle Marsh's Complete Directory to Prime Time Network and Cable Shows.

The series turned the standard mystery structure inside out. Instead of being revealed at the end, the criminal and the crime were shown in great detail in the show's opening scenes. It was then up to Columbo to stumble onto the scene and figure out whodunit -- something the audience already knew.

On the big screen, Falk's roles included parts in Cassavetes' gritty, verite films, such as "A Woman Under the Influence" (1974), as well as broad comedies, most notably "The In-Laws" (1979). In the latter, he played a CIA agent who drags a new friend, a dentist played by Alan Arkin, into a plot that involves currency printing plates and a coup in an unnamed Latin American country.

Falk's choice of roles was often quirky and unusual. After the initial run of "Columbo" ended, he starred in "... All the Marbles" (1981) as the manager of female wrestlers; German director Wim Wenders' "Wings of Desire" as an existentially blocked version of himself; and "The Princess Bride" as a storytelling grandfather.

In recent years, Falk had periods of furious activity -- he had three credits in 1995 and four in 2000, according to the Internet Movie Database -- and relaxed almost-retirement. In 2008, his daughter said he was suffering from Alzheimer's disease in a filing for conservatorship. Early that year, Falk had been found disoriented on a Beverly Hills street, and that summer he suffered a head injury in an auto accident.

The conservatorship was granted to his wife, Shera, in June 2009. A doctor who evaluated Falk testified that the condition had worsened since a series of dental operations in 2007 and a hip procedure in 2008, and that the actor couldn't remember "Columbo."

But Falk always wanted to move on to the next thing, anyway. Taking a tip from his friend Cassavetes, he refused to repeat himself -- one reason his characters, even the ones he played more than once, always seemed so fresh.

"If your mind is at work, we're in danger of reproducing another cliché," he once said. "If we can keep our minds out of it and our thoughts out of it, maybe we'll come up with something original."

Falk is survived by his wife of 34 years, Shera; and two daughters, Catherine and Jackie, whom he adopted during his first marriage, to Alyce Mayo.

Through a spokesman, Falk's daughters said: "His daughters will always remember him for his wisdom and humor, time shared on vacations and hockey games, and for wild rides through the streets of Los Angeles with a one-eyed driver."