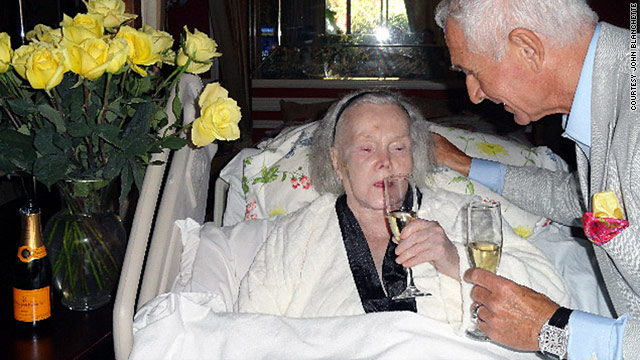 Gabor, 94, is seen clicking a flute of champagne with Prince Frederic von Anhalt as she sits in her bed.

The actress has suffered major health problems in the last year, including hip replacement surgery and a leg amputation. She has been unable to walk since a 2002 car accident.

The release of the photos, taken in the bedroom of the couple's Bel Air mansion, upset Gabor's only child, Francesca Hilton. She issued a statement through her publicist criticizing von Anhalt, her mother's ninth husband.

"He once again uses my mother to bring publicity to himself," Hilton said. "He once again releases photos of my mother in unflattering situations without hair and makeup, two things that were so important to her."

"This time he is feeding her alcohol, which could be detrimental to her condition since she is on numerous medications," she said. "It's disgusting and no one is doing anything about it."

The Hungarian-born actress, the second of the three celebrated Gabor sisters, is famous for her many marriages and strong personality as well as her acting prowess.