The flames apparently ignited in the garage, but quickly spread to the attic of the large home Saturday afternoon, said Brentwood, Tennessee, Fire Chief Brian Goss. The house is considered a total loss.

"Stuff is stuff," Rhonda Adkins told a reporter for CNN affiliate WSMV in Nashville as she stood on a neighbor's lawn watching her home burn.

Her three young daughters and their dog were inside the home with their nanny when the fire started. Rhonda Adkins was driving a few blocks away when a neighbor called her.

"She said that the house was on fire and we looked up in the air and we saw the black smoke," Adkins said. "And I said, 'Oh, my God, this isn't happening, this isn't real.'"

When she pulled up to her yard, she found her children there unhurt, she said.

"They ran to their safe place like we practiced, in the front yard at a big tree," she said. "And it worked. You know, fire safety is so important, and today we used it."

Brentwood firefighters, the same ones who were inside her home battling the flames, visited her children's elementary school to teach fire safety earlier this year, she said. One lesson was to place a yellow ribbon where the family should gather if the house caught fire. 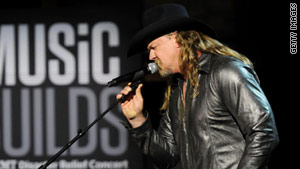 Trace Adkins was on a plane to Alaska for two shows and some fishing when the fire happened.

"I tied the yellow ribbon around the tree to go to," she said. "It stayed there for about a month. Trace kept going, 'When you gonna take that ribbon down?' and I'm like, 'You know, I might need it one day.'"

Adkins said she never really expected it to be needed. "But we did what those firefighters told us and we practiced it today," she said. "It saved my kids' lives."

With her daughters, their nanny and the family dog safe, Adkins said it was easy for her to be calm and thankful despite the loss of her home. She did have one regret, though.

"I have not backed up all my photographs, and I'm just sitting here sick because those are the things that matter the most," she said. "It's your memories, our wedding pictures, I don't have, because the negatives are in the house.

"Please, everybody, practice fire safety, and back up all your pictures," she said.

Her husband was on a plane to Alaska for two shows and some fishing when the fire happened. His publicist said he immediately boarded a return flight to Tennessee when he landed.

"Trace wishes to express his gratitude for the immediate response of the Brentwood Fire Department and is humbled by the outpouring of concern from friends and fans," his spokesman said in a written statement to CNN Sunday.

Coincidentally, Adkins' newest single, "Just Fishin,'" is being released this week. The video, which features the singer and his youngest child, Trinity, on a father-daughter fishing trip, was released Friday.

Adkins, 49, was a finalist on NBC's "Celebrity Apprentice" in 2008, but host Donald Trump chose Piers Morgan, now a CNN talk show host, as the winner.