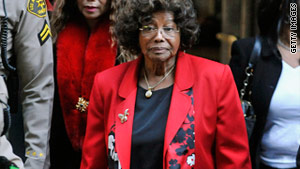 Katherine Jackson leaves a January preliminary hearing in the case of a doctor accused of causing her son's death.
STORY HIGHLIGHTS
RELATED TOPICS

Los Angeles (CNN) -- Katherine Jackson's sadness over the loss of her son is constant nearly two years after Michael Jackson's sudden death from an overdose of a surgical anesthetic.

"There's not a day that passes I don't think about my child and he should be here right now," Jackson said in a CNN interview at her home Tuesday. "But it was negligence of a doctor and it's just hard, really hard."

Dr. Conrad Murray, who was Michael Jackson's personal doctor, is charged with involuntary manslaughter in the singer's death. His trial has been postponed until September.

Murray's lawyers suggest a frustrated and sleepless Jackson may have poured the surgical anesthetic propofol mixed with lidocaine into his juice bottle while the doctor was out of his bedroom.

To help her cope with the sadness, Katherine Jackson recently moved into a spacious new mansion on a hilltop above Calabasas, California, away from the Encino home where the Jackson family lived since 1969. Katherine Jackson loves the higher ceilings and larger windows, but it's also a refuge from sad reminders that haunt the old home.

"Michael was 11 years old when we moved there and he stayed there until he was well into his 20s before he moved," she said. "It just brings back a lot of memories, but they're sad memories to me now because he's not here."

Visitors to the ground floor see artwork collected by Michael Jackson, but they won't see his photographs. The three children left behind by the pop icon treasure images of their father, but his mother avoids them.

What you do see are the flowers that Katherine Jackson surrounds herself with, a passion she recently turned into a business. She launched the Katherine Jackson line of floral arrangements this month, just in time for fans to send them to their moms this Mother's Day.

But since she's a Jehovah's Witness, Katherine Jackson does not observe holidays. Wednesday is her 81st birthday, but there will be no celebration in her home.

The youngest of Michael's children, 9-year-old Blanket, has his own way of remembering his father. His long brown hair grows longer, reaching halfway down his back.

"He doesn't want to cut it, so I've talked to him about it," his grandmother said. "He likes it long because his father wanted him to have long hair at the time, but there will be a day that he'll have to cut it, I think."

Blanket studies at home with a tutor, while Prince, 14, and Paris, 13, attend classes at a private school.

"They're doing very well," she said. "They're going to school everyday."

The children are shielded from news about the criminal case against the doctor accused of causing their father's death. The trial has been delayed until September, but when it does start, they won't see their grandmother around the house during weekdays. Katherine Jackson will be sitting in court.

She'll be there listening as the doctor who conducted the autopsy describes again, as she heard in last January's preliminary hearing, how Jackson's liver was placed in a blender so he could measure the chemicals in his organs.

"Worse comes to worse, I'll just step out," she said. "I heard they're going to show some autopsy shots, and I don't want to see that. So, I'll leave and, you know, sit out in the hall or somewhere until it's over and then I'll come back in. But I just feel that I have to be there."

Katherine Jackson, although she'd rather avoid sadness, proved her strength six years ago when she sat in court for five months as her son was tried and acquitted on child molestation charges.

Some online media reports have suggested Katherine Jackson's health is failing, but she laughs about the speculation. The limp you might notice in her walk is not from old age, but it a remnant of a childhood battle with polio.

She stays active with her new floral venture and decorating her new home.

"I'm still here and I'm blessed and I thank God," she said.