Lohan to Leno: I'll be back with an Oscar! 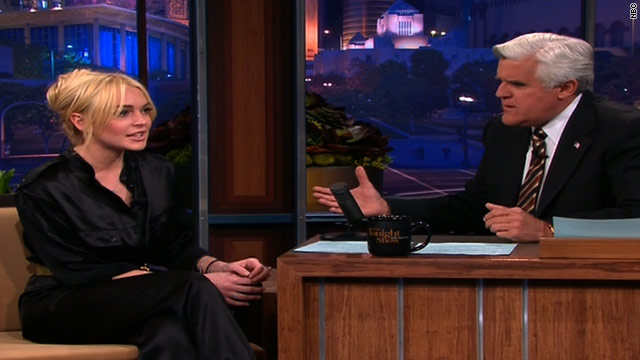 Lindsay Lohan admitted on "The Tonight Show with Jay Leno," that she has made mistakes in the past, but she's ready to change.
STORY HIGHLIGHTS

Los Angeles (CNN) -- Lindsay Lohan, whose career has been derailed by drunken driving convictions, probation violations and a shoplifting charge, admitted in an interview with talk show host Jay Leno to "poor decisions in the past" -- but predicted an Oscar is in her future.

Lohan, in a "Tonight Show" interview taped Monday and broadcast Tuesday, said she's "willing to do the work that I have to do to follow through with being an actress."

She hopes to be back on Leno's show in a few years with an Oscar, Lohan said.

"I've made a lot of mistakes and I've recognized that, but I'm in the clear now and I feel like as long as I stay focused then I will be able to, you know, achieve what I want to be able to achieve," Lohan told the NBC show's host.

When Leno asked what one thing she would like to change about herself, Lohan said it would be the public perception of her.

"I want the public knowledge to be about my work, not about things that I didn't get into this business for, that I've put myself into positions where that was the bigger story than what I was working on," she said.

Lohan, 24, said she's been cast to play mobster John "Junior" Gotti's wife in a movie, but a 120-day jail sentence and several months of community service for a probation violation threatens to keep her out of the movie. It starts shooting in October.

She is also scheduled to go on trial in June for allegedly stealing a gold and diamond necklace from a Venice, California, jewelry store. If convicted, Lohan could face up to a year in jail.

The 13 days she spent in a Los Angeles jail last summer "was an interesting experience and it was definitely a wake-up call," Lohan said. "And I think when it happened, everything happens for a reason. I don't know exactly what will happen."

Lohan said she was "kind of numb" when Sautner sentenced her to 120 days in jail and 480 hours of community service.

"I was kind of shocked, I didn't really expect the outcome to be what it was, but I'm a big girl and I'm going to do what I'm told to do, continue on with working in my life and I'm taking responsibility," she said.

The actress has admitted a drug addiction in the past, and she's spent at least eight months in substance abuse rehab in the last four years.

She blamed her youth on her bad choices.

"Being young and being in a position that I was in, you don't really take the time to appreciate what you have, and it's all kind of a whirlwind and people make decisions for you," she said. "But I'm not a kid anymore."

Lohan's most optimistic statement came when Leno asked where she sees herself when she turns 30 -- six years from now.