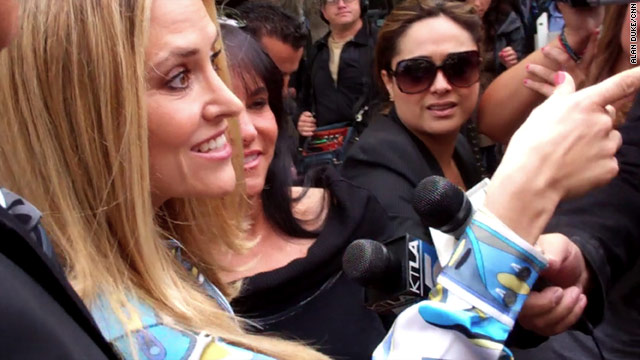 Los Angeles (CNN) -- A hearing in Charlie Sheen's custody battle with estranged wife Brooke Mueller took place Tuesday in private, despite a request from the actor's lawyer that reporters be allowed to witness the proceeding.

While the results were sealed by the judge, Mueller was smiling broadly as she left court, in contrast to a stone-faced Sheen.

Los Angeles County, California, Superior Court Judge Hank Goldberg granted Mueller's request for privacy, agreeing with her lawyer that the publicity would not be good for the couple's twin 2-year-old sons.

About an hour after he entered the courtroom, the actor departed, strolling down the hallway with a woman on one arm and lawyers and guards surrounding him. He looked straight ahead as he moved to a non-public elevator for a departure from the basement garage.

Mueller, surrounded by cameras and reporters as she left the courthouse, smiled but said little. Asked how she was doing, she said, "Excellent, now let's go home." She then pushed through the scrum of media toward her limo.

Sheen detoured Tuesday from the East Coast leg of his "Violent Torpedo of Truth" stage tour to ask Goldberg to award him full custody of the boys after Mueller failed to appear for a drug test that was required under their child-custody agreement.

As he arrived Tuesday night in Washington for a performance, Sheen told a crowd of about 30 people gathered outside that he could not talk about his custody battle and didn't know the current status of his legal battle with Warner Bros. television over his firing from the CBS sitcom "Two and a Half Men." His performance was pushed back an hour as he was traveling cross-country from the hearing.

"I was about to make a phone call and see how that thing went today," Sheen said. "I just landed, got a police escort from the airport. We ran more red lights than Brooke Mueller going to a pawn shop."

At the California hearing, Sheen's lawyer, Mark Gross, had argued that Mueller was "a dollar short and a day late" in asking for the case to be sealed since she did not ask the same last month when she accused Sheen of threatening to kill her.

"Now that she has failed to appear for a test, she wants it sealed," Gross said.

But Goldberg was unmoved. "I don't think it would be in the best interest of the children to be exposed to that material," he said.

While the couple reached a custody agreement before filing for divorce last year, they have argued recently over visitation arrangements.

The dispute boiled over in early March when Mueller asked for a restraining order, swearing in a statement that Sheen had threatened to kill her.

"I will cut your head off, put it in a box and send it to your mom," Mueller said that Sheen told her.

The assertions were made in a court document that resulted in a court order that removed Sheen's sons from his home.

In an interview the next day with NBC's "Today Show," Sheen denied that he had threatened Mueller. The quote against him was fabricated, he said, calling the allegation "colorful."

Sheen's lawyers were also at another hearing Tuesday morning. A judge will decide if the actor's legal battle with the studio over his firing will be heard in open court or in arbitration.