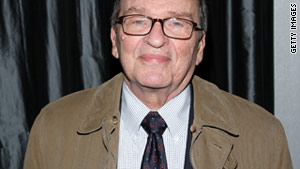 His daughter, Jenny Lumet, told CNN he died of complications from non-Hodgkin's lymphoma at 3:40 a.m. ET. He was surrounded by family at the time of his death, she said.

Lumet's films often dealt with deep moral and ethical issues, starting with his film, "12 Angry Men" in 1957, which featured Henry Fonda playing the sole holdout juror who convinces the others that a man on trial is, in fact, innocent.

Lumet also tapped into the national consciousness with "Network," the 1976 satirical film about a TV anchor whose signature rant became a household phrase for every American frustrated with the system and hypocrisies: "I'm mad as hell and I'm not going to take this anymore!"

Lumet's iconic films starred some of Hollywood's most accomplished actors.

With Al Pacino as the lead actor, Lumet's "Serpico" delved into one cop's struggle against the seemingly insurmountable corruption in the New York City police department. The film was based on a book by Peter Maas about the struggles of two actual New York City cops, Frank Serpico and David Durk. Pacino secured an Oscar nomination for his performance.

Pacino starred again in "Dog Day Afternoon" in 1975, which also featured a memorable chant -- "Attica! Attica!" -- that tapped into an American outrage about a deadly prison riot. The film dealt with protagonist Sonny's plan to rob a bank for his boyfriend's sex change operation, though Sonny is a married man. His gang's bank robbery, a tale also inspired by actual events, is foiled.

In 1982, Lumet directed another courtroom drama, "The Verdict," whose screenplay was written by David Mamet, and whose cast was led by Paul Newman. Lumet and Newman both received Oscar nominations.

Despite his filmmaking accomplishments, Lumet never won an Oscar for any particular film. However, in 2005, the Academy of Motion Picture Arts and Sciences gave him an honorary Academy Award.

In a statement, Grammy Award-winning producer and composer Quincy Jones said Lumet gave him his start in film composing in 1963 with "The Pawnbroker."

"I was privileged to work with him on four additional films including 'The Wiz.' Sidney was a visionary filmmaker whose movies made an indelible mark on our popular culture with their stirring commentary on our society," Jones said in a statement. "Future generations of filmmakers will look to Sidney's work for guidance and inspiration, but there will never be another who comes close to him."

New York Mayor Michael Bloomberg described Lumet as "one of the great chroniclers" of New York City because his films often used the city as both settting and a figurative character.

"Sidney Lumet will be remembered for his ability to draw great performances out of his actors, his technical talents as a filmmaker and his zeal for the arts," Bloomberg said in a statement. "I was lucky enough to know Sidney -- we spoke just last week. I let him know that we intend to honor him this June with the 'Made in NY' Lifetime Achievement Award. Sidney will now receive the award posthumously and I will ask his daughter Jenny, also in the movie business, to accept it on his behalf."

Lumet was born on June 25, 1924, in Philadelphia. His father, Baruch, was a Polish-born actor who moved the family to New York when Sidney was a baby. The family joined the Yiddish Art Theater, and Sidney Lumet began acting at age 4 with his father. Later, Lumet acted on Broadway and went into directing after serving in World War II.

Lumet married four times, to actress Rita Gam, Gloria Vanderbilt and Gail Jones, the daughter of Lena Horne. He married Mary Gimbel in 1980: she survives him, along with another daughter by Jones, Amy Lumet; stepdaughter Leslie Gimbel; stepson Bailey Gimbel; nine grandchildren, and a great-grandson.