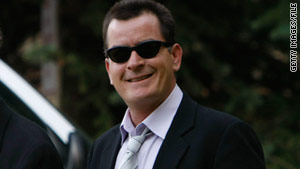 Charlie Sheen has added tour stops in Ohio and the Northeast.
STORY HIGHLIGHTS

(CNN) -- Dripping with tiger blood and coursing with warlock power, fired "Two and a Half Men" star Charlie Sheen has announced five more stops on his tour, "My Violent Torpedo of Truth/Defeat is Not An Option Show."

The first two shows -- in Chicago and Detroit -- sold out in minutes. The newly announced shows will bring the tour to Cleveland; Columbus, Ohio; New York; Wallingford, Connecticut; and Boston.

What can fans expect? Apparently lots of questions.

Sheen also makes a promise in the midst of the questions.

Replacing Sheen a gamble worth taking?

"This IS where you will hear the REAL story from the Warlock. Bring it. I dare you to keep up with me."

Sheen, 45, has been known for his highly publicized marital, legal and substance abuse problems as much as his acting. Lately he has been known for a bizarre series of rants, especially on his immensely popular Twitter account that logged 2.8 million followers in a few week's time.

Warner Bros fired Sheen from "Two and a Half Men" last week after he conducted a long-running rant against the show's producers.

Warner Bros is owned by Time Warner, which is also the parent company of CNN.