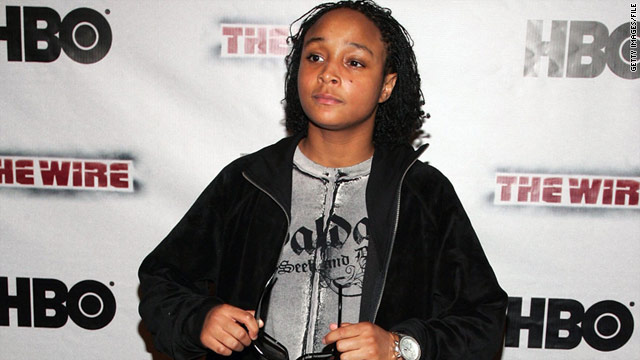 (CNN) -- Actress Felicia "Snoop" Pearson, who once dealt drugs in Baltimore before a chance encounter got her a role on HBO's "The Wire," was arrested overnight during a series of raids in her hometown, police said Thursday.

It targeted 79 people; 63 were arrested in the raids, according to CNN Baltimore affiliate WBAL.

The U.S. Attorney's Office said 24 people face drug charges at the federal level, and 40 more face similar charges at the state level, including Pearson. A federal indictment alleges that the conspirators mainly obtained heroin and marijuana from suppliers in New York and California.

She was arrested on a charge of conspiracy to distribute heroin and aiding and abetting, prosecutors said in a statement.

WBAL said it got no reply when it asked Pearson for a comment.

"It's named 'Public Enemies' because a lot of the main targets are violent repeat offenders," said Carl Kotowski of the U.S. Drug Enforcement Administration in Baltimore. "Allegedly, they've been tied to a few murders in the city."

In her 2007 memoir, "Grace After Midnight," Pearson -- now 30 -- wrote of being born to a drug-addicted mother and then selling drugs herself.

At 14, she killed another teenager and served time in Jessup State Penitentiary for murder, the memoir says.

After her release from prison, she met an actor from "The Wire" cast in a club and joined the show until it ended in 2008.