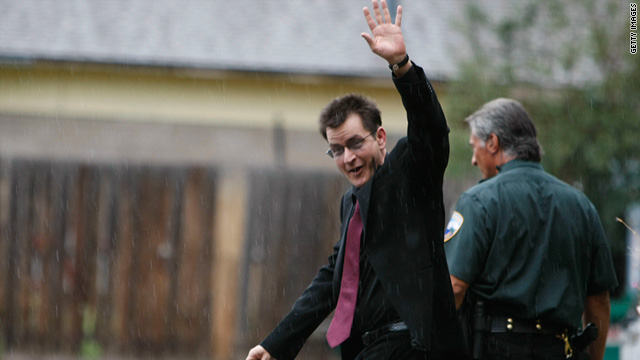 Charlie Sheen's quotable interviews have earned him a legion of Twitter followers, but what are the odds this is an act?
STORY HIGHLIGHTS
RELATED TOPICS

(CNN) -- For anyone else, the week that Charlie Sheen's had would've ended in shambles -- a career low point that would send any celebrity into hiding.

His TV show? Shut down. His sons? Taken away. His estranged wife says in a restraining order that he threatened to kill her.

Not to mention that this drama is unfolding as the cameras capture it all -- sometimes live on air -- while an entire nation watches, unsure of whether to cackle or condemn.

But Sheen? Well, in some ways, the guy really is kind of winning.

The odd thing about this very publicly played-out saga is that, while the circumstances warrant concern, Sheen's reaction to it all has inspired a team of followers -- literally. As we're sure you've heard by now, a million Twitter users signed up within a single day to hear more from the already overexposed celebrity, and the number has only grown since.

This little detail didn't slip past Sheen (or whomever is running his Twitter account), even with all the issues he's got going on at the moment. "In all sincerity... Thank you Twitter community for the warm reception & the followers that helped get me to 1M in 24 hours!!!," he wrote, adding in a "#teamsheen" for effect. That hashtag, along with the Sheen-isms #tigerblood, #planbetter and #winning, have become popular on the social media site.

But before these quotes became an inescapable part of our cultural lexicon, the 45-year-old actor was busy igniting the firestorm by going off about "Two and a Half Men" co-creator Chuck Lorre. These interviews, mind you, followed a late January hospital run that preceded Sheen undergoing rehab at home -- a.k.a., the Sober Valley Lodge.

Yet by the time Sheen was scheduled to head back to work, CBS and Warner Bros. (the latter of which is owned by CNN's parent company, Time Warner) announced that production had been halted on "Two and a Half Men" for the remainder of the season. A statement said the decision was "based on the totality of Charlie Sheen's statements, conduct and condition."

Yet, somehow, he's been able to stay afloat amid this publicity crisis -- even without his actual PR. Sheen's former representative said in a statement earlier this week, "I have worked with Charlie Sheen for a long time and I care about him very much. However, at this time, I'm unable to work effectively as his publicist and have respectfully resigned."

But the interviews kept on coming. Sheen has been on what feels like every show that would have him, all the while spouting statements that have turned into punchlines. For the past week, viewers have been both appalled and amused by his brazenness, appropriating Sheen-esque quips as often as possible. Websites where all you do is hit refresh for a new Sheen quote are multiplying. The more outlandish his statements, the more anxiously the public waited for another (intentionally? Unintentionally? We're still deciding) hilarious remark.

Perhaps it's a response that Sheen -- or maybe even one of his goddesses? -- has been aware of all along. Really, why else do the endless circuit of interviews? Sheen seems to have eagerly embraced the attention, saying he's handling the "tsunami of media" by riding it "on a mercury surfboard."

And while Sheen swears he's not putting on an act -- he told People magazine as much in a recent interview -- we still think we've heard this all before.

What are the odds we're being Joaquin'ed?

Acclaimed actor Joaquin Phoenix once also seemed to slide down a spiral of bizarre behavior, first announcing in 2008 that he was retiring from acting, and then saying he planned to become a rapper. He grew out the beard, picked up the mic and seemed to be similarly unaffected by public opinion, even after he gave a strange performance in Las Vegas in January 2009, during which he fell off the stage.

"When Phoenix first announced he was giving up acting for a life in hip-hop, we all thought he was nuts," Entertainment Weekly wrote at the time, expressing a sentiment shared by many. Phoenix's abrupt switch-up turned into an "is he joking?" question mark for nearly two years, especially when he started turning in not-so-hot performances. After his Vegas appearance, EW admitted that if Phoenix was making "a serious attempt at a new career, then the one-time Oscar nominee has us seriously puzzled."

His actions simply didn't seem to add up, including that now infamously weird appearance he made on "Letterman" in February 2009, a bizarre interview that, The Boston Globe said, "sparked fresh concerns for his mental health." While The New York Times hailed the awkward exchange as an instant classic, MTV questioned if it was a sign of Phoenix's unraveling.

The Los Angeles Times also wondered what was up with the actor, and called upon psychiatrist Paul Dobransky, who said that Phoenix's "socially inappropriate" behavior exhibited some signs of schizophrenia. The psychiatrist and author added that the actor's poor hygiene and grooming, habit of muttering and lack of facial emotion were "classic symptoms of mental illness."

"There is something wrong," Dobransky told the L.A. Times. "And it's beyond drug abuse."

With the 2010 mockumentary "I'm Still Here," directed by Phoenix's brother-in-law, Casey Affleck, Phoenix still had everyone thoroughly confused, unsure if the reported drug use and bizarre behavior displayed in the film were really the actor or just his latest role.

But of course, you know how the story ends. The actor kept us guessing right up until the moment when he and Affleck finally relented and 'fessed up. The "I'm Still Here" director told The New York Times that Phoenix gave "the performance of his career" with the making of that film, and Phoenix himself returned to "Letterman" to apologize.

"I assumed you would know the difference between a character and a real person," Phoenix told David Letterman in his apology.

Is there a chance that Sheen could be making the same assumption? Somewhere among the legal issues, the "Two and a Half Men" drama and the off-the-wall statements like "I'm tired of pretending like I'm not ... a total bitchin' rock star from Mars," it feels like the former sitcom star has nearly become a caricature of himself.