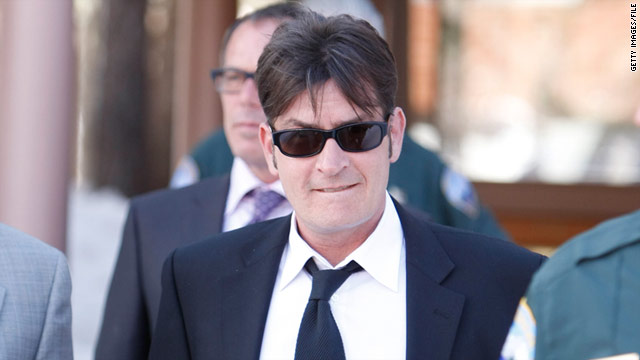 The troubled "Two and a Half Men" star was interviewed early Monday on "Good Morning America" and "Today," and later on TMZ's live webcast, talk radio program "Loose Cannons" and CNN's "Piers Morgan Tonight." The next day, he chatted on Howard Stern's radio show. He's also on the cover of the new People magazine.

During the interviews, the actor let loose a number of very quotable comments, saying that he's not bipolar but "bi-winning," that he "was bangin' seven-gram rocks and finishing them because that's how I roll," and that producers of his hit show "picked a fight with a warlock."

The common consensus quickly became that Sheen may well have issues beyond the current hiatus of his hit CBS sitcom.

On a 'drug called Charlie Sheen'

Yet as uncomfortable as some of the moments may have felt for fans, Sheen's appearances made for compelling television that many of us couldn't turn away from.

"It's seeing somebody that has more than us, having less than us," said Dr. Lillian Glass, author of the book "Toxic Men." "We are watching this, and you feel like 'Hey, I may not have the millions, but I've got my act together.' "

Dr. Drew Pinsky, whose new show premieres on HLN on April 4, told CNN's Piers Morgan in an earlier interview that he believes Sheen's issues have moved beyond substance abuse.

"The problem with him now is he's getting so impaired psychiatrically that eventually -- provided he doesn't get really medically ill or harm himself or somebody else and the legal system step in -- eventually, the psychiatric system is going to step in," Pinsky said.

Reacting to similar comments by Pinsky, Sheen told Piers Morgan "To like have a prognosis about somebody you've never been in the same room with, based on his image in a media setting? He should be ashamed of himself...got to dismiss these clowns. "

It's not as if this type of very public unraveling hasn't been seen before.

Celebrity meltdowns are as old as Hollywood, and in the age of the 24-hour news cycle, the events are more buzzed about than ever. Names like Britney Spears and Lindsay Lohan have become almost synonymous with the concept of troubled stars enduring very personal hardships very publicly.

But Glass said that unlike those young celebs, Sheen appears to currently lack a support system that could step in and help him. Consequently, she said, Sheen is out there in full glory -- appearing gaunt and speaking angrily against many, from his show's creator to the media.

"When Britney Spears was having a meltdown, she had this great family support that was behind her," Glass said. "But when your team abandons you like [his publicist], like your producer. CBS is making millions and millions, so it would be in their best interest to keep him, but they can't because he is so out of control."

"I have worked with Charlie Sheen for a long time and I care about him very much," Rosenfield said in a statement. "However, at this time, I'm unable to work effectively as his publicist and have respectfully resigned."

For years, the actor has been a darling of the tabloids for his colorful lifestyle: There have been marital breakups, rehab stints and public admissions of dalliances with prostitutes, which initially came to light in a high-profile trial involving accused Hollywood madam Heidi Fleiss in 1995.

On February 14, Sheen said on the syndicated radio program "The Dan Patrick Show" that people should avoid crack unless they can "manage it socially." About 10 days later, he told the "Loose Cannons" radio show that he was at war with the creators and producers of his hit CBS sitcom.

But his more recent appearances have ratcheted the Sheen machine to another level.

On Monday, he allowed TMZ to record him in his backyard, where he was joined by some of his friends who weighed in during the interview. At one point, he paused after a request from one of his girlfriends to give her a hug and said, "When the goddess speaks, the brain melts."

As outrageous as Sheen's behavior may appear to some, Dr. Mike Dow said it's in keeping with someone in a battle against addiction.

Dow, who has not examined Sheen, is a Los Angeles-based psychotherapist who serves as an addiction recovery expert on the TLC series "Freaky Eaters" and "My Strange Addiction." He said Sheen's behavior has appeared to be shocking, comical and delusional.

"I think in his mind, what we are seeing is what we see with a lot of addicts, which is defensiveness," Dow said. "Underneath it all, I do believe that what he really is, is scared because he knows that he is an addict."

Dow said shows like his are popular because stories of addiction can be dramatic and Sheen's very public problems have the same appeal.

"I hope that what we do on our show, which is actually help people, far outweighs the Charlie Sheens, which is really just a train wreck," Dow said. "I hope he takes a page out of the Robert Downey Jr. handbook and gets his life and career back on track."

Pax Prentiss, co-founder and director of the Passages Malibu Drug and Alcohol Treatment Center, said Sheen is not painting himself in a favorable light.

"I wish Charlie had some real clean time under his belt before he went on television and said the things that he has been saying," said Prentiss, who has been sober for more than a decade after addictions to cocaine, heroin and alcohol. "For one, he is saying he's cured, and it would be good if he had maybe six months of sobriety under his belt first. It takes away from what he is saying when you see him, and it's so obvious that he's had a drug problem."

Jeff Jarvis, who blogs about media and news at Buzzmachine.com, said he worries that Sheen, in his current state, is being exploited. There is also a need for context to his media appearances, Jarvis said.

"I'm not against covering something that is wrong or insane or any of the things that he has done, but to act as if there is something to be learned from what he says right now is questionable," he said.

Jarvis said he is in no way equipped to diagnose Sheen, but the writer has a concern that giving Sheen a stage at this point in his life is detrimental.

"His behavior, I would think, certainly is to act out and get attention," Jarvis said. "He is getting a lot of attention right now, and I think that affects his recovery and his career."

Bob Garfield, host of NPR's "On the Media," said in an e-mail to CNN that "The question is, just because someone is a celebrity, are the media absolved of the responsibility not to exploit his illness for the sake of audience?"

"Rhetorical question there," he wrote. "The answer is, when someone is coming mentally unhinged, it is ethically abhorrent to egg him on."