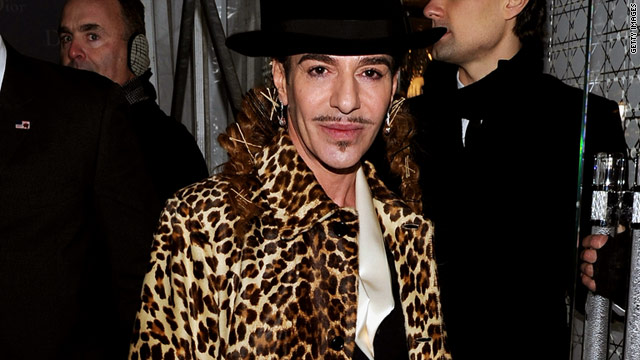 Designer John Galliano's comments were reportedly made at a bar in Paris in October.
STORY HIGHLIGHTS

The company condemned his "deeply offensive statements and conduct" in a statement announcing the plan to fire him.

The comments were reportedly made at a Paris cafe last year.

"I am deeply shocked and disgusted by the video of John Galliano's comments that surfaced today," said Portman, who appears in ads for Miss Dior Cherie perfume. "In light of this video, and as an individual who is proud to be Jewish, I will not be associated with Mr. Galliano in any way.

"I hope at the very least, these terrible comments remind us to reflect and act upon combating these still-existing prejudices that are the opposite of all that is beautiful," she said.

Before the video surfaced on Monday, Christian Dior already had suspended Galliano for allegedly making anti-Semitic remarks in another incident.

The fashion house said Friday that Galliano was suspended from his duties pending the outcome of an investigation into remarks the designer allegedly made last week.

Galliano was arrested Thursday night following an argument in a bar in Paris' Marais district, a prosecutor said.

Police arrested him on charges of assault and making anti-Semitic comments after a couple pressed charges. The designer was taken to a police station, and a test revealed he had a high level of alcohol in his blood, the prosecutor said.

Galliano has been released but may be summoned in the coming weeks. Zerbib said his client has denied the accusations.

Announcing Galliano's suspension, Dior President Sidney Toledano said, "The House of Dior declares with the greatest firmness its policy of zero-tolerance regarding any anti-Semitic or racist statement or attitude."