Obsessions: Gwyneth Paltrow is having a moment 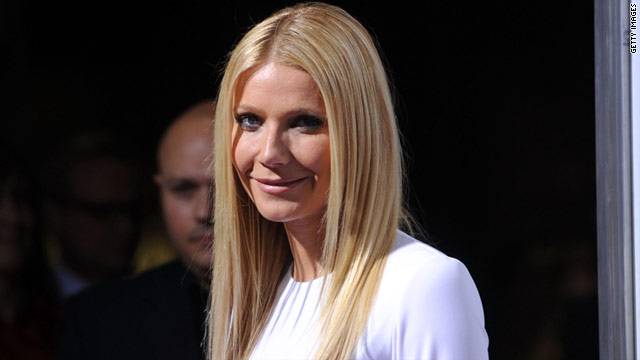 Gwyneth Paltrow is riding high these days as one of the coolest actresses in Hollywood.
STORY HIGHLIGHTS
RELATED TOPICS

(CNN) -- Remember when Gwyneth Paltrow was viewed as icy, erudite and just a touch untouchable?

After all, the actress is in a league of her own. She speaks fluent Spanish, advocates a macrobiotic diet and urges followers of her site GOOP to buy high-end products for everyday living that most people can only dream about.

She is the woman who once held the hearts of both Brad Pitt and Ben Affleck in her manicured, patrician hands, had the temerity to name her daughter "Apple," and has managed to have a more private personal life than just about anyone else married to a British rock star.

So why is she now so cool?

In Hollywood, as in life, it's all about the timing.

This has been quite a year for Paltrow, who on Sunday is set to perform an Oscar-nominated tune from her recent film "Country Strong" on the Academy Awards. For those keeping track, it will be the completion of her trifecta of performances after hitting the stages of the Country Music Awards and the Grammys.

The latter saw her clad in a black body suit and high heels, climbing aboard a baby grand piano to rock out "Forget You" with singer Cee Lo and a group of musical puppets. The moment led hip-pop website Global Grind to proclaim, "It's official and definitely cemented that Gwyneth Paltrow is pretty damn cool."

To illustrate how far the actress has come in the street cred department, one need only look to articles like the one published last year by Salon.com titled "Why Do So Many People Hate Gwyneth Paltrow?"

In it, writer Mary Elizabeth Williams noted that Paltrow hate is "nothing new" and "like herpes, it can lie dormant for long periods of time, but it never goes away completely."

"Taller, blonder, richer than thou, she has, since she launched her career 15 years ago, represented the epitome of everything most mere mortals will never come close to being, a Little Miss Perfect who had sex with Brad Pitt," Williams wrote.

Much of the mocking of Paltrow has revolved around her site GOOP, where she offers her advice on what to make, go, get, do, be and see.

In 2009, Daily Beast writer Rebecca Dana chronicled her three-week adventure of attempting to follow Paltrow's words of wisdom, which range from detoxing with expensive organic juices to getting into the holiday spirit by purchasing a $1,395 Mulberry weekend bag in chocolate natural leather.

"There's a lot to scoff at here, but the three weeks I spent following GOOP were pure joy," Dana wrote. "Expensive, inconvenient and totally unsustainable, yes, but also full of unexpected pleasures."

Paltrow addressed the barbs aimed at her and Goop in an interview last year with Harper's Bazaar.

"The hotel concierge is not telling me where to get a facial, Christy Turlington is," Paltrow said. "Doesn't everyone want to know that? I would want to know if you went to Mario Batali's house what he made you for dinner and could I have the recipe. So why not?"

Fans doubted just a bit when it was announced that the actress would be making a guest appearance on the hit Fox show "Glee." Even Entertainment Weekly mused that "seeing the world's poshest human sing about not being able to afford a Ferrari will provide some interesting cultural dissonance."

Sure, Paltrow is married to Coldplay front man Chris Martin, is besties with Beyonce and has showcased her singing in movie roles. Could she pull off a small screen appearance on a show enjoying its zeitgeist moment in the sun?

Those sentiments were echoed in Paltrow's opening scene when one of the characters asks Paltrow's character, "What would you know about Cee Lo, cause you're like 40?" (In reality the actress is 38.)

Paltrow's performance nailed it and charmed the socks off gleeks and critics alike.

"She not only acknowledges the fact that she's exceedingly white, she owns it," said Jen Chancy of the Washington Post's Celebritology 2.0 column. "Her vocals are strong and she completely embraces the cornball-tasticness in a way that not every 'Glee' guest star -- or for that matter, cast member -- can always manage."

The gig went over so well that Paltrow was invited back for another appearance as everyone's favorite substitute teacher, Holly Holiday (Even the name is cool!).

While she revels in her newfound uber-hipness, the actress, who won an Academy Award when she was 26 for her role in "Shakespeare in Love," and her family continue to split their time between England and the States as she plans her next roles and Martin pursues his music.

Paltrow told talk show host Chelsea Handler that her kids are growing up experiencing both cultures to the fullest -- and consequently have adopted interesting accents.

"My (son's accent) is like half Brooklyn, half English," Paltrow said. "My daughter is completely American at home with me and completely British at school. If she's home with a friend over she'll be like (in a British accent) 'Mummy, I really can't find the Play Doh.' Then she will come over to me and she'll be like (in an American accent) 'That Play Doh's totally dried out.' "