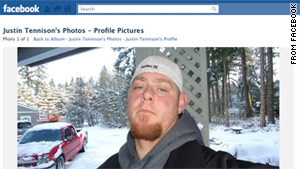 Justin Tennison was an engineer on the Time Bandit during the two recent fishing seasons. He was 33 years old.
STORY HIGHLIGHTS

Justin Tennison, 33, died of "unknown causes," but his body was flown to Anchorage, Alaska, for an autopsy, according to a statement from the Homer, Alaska, Police Department.

Tennison served as an engineer on board the Time Bandit during two recent fishing seasons, according to a statement on the boat's website.

"Justin was tough as a bull and was an all-around good hand," the boat's Capt. Johnathan Hillstrand said. "The captains and crew appreciated his hard work and many contributions this past year."

He is survived by a son, daughter, sister, father and grandparents, according to the statement.

Tennison's is the second death in a year among the Discovery Channel show's cast.

Capt. Phil Harris, the tattooed and gruff captain of the Cornelia Marie, died a year ago of complications from a stroke suffered while his crew offloaded crab at St. Paul Island, Alaska. He was 53.