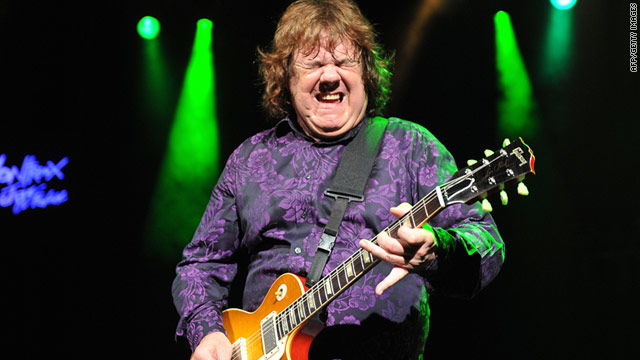 (CNN) -- Gary Moore, a former guitarist with the 1970s rock band Thin Lizzy, has died at age 58, according to his official website.

"It is with deep sorrow and regret that we have to announce that Gary Moore passed away while on holiday in Spain last night," the site said.

There was no immediate confirmation on the cause of death.

Moore was an original member of Thin Lizzy, based in Dublin, Ireland. The band recorded guitar-driven rock hits, including "Jailbreak" and "The Boys Are Back in Town."

A statement from Eagle Rock Entertainment, his most recent record label, said Moore was "the consummate musician acknowledged as one of the finest guitarists that the British Isles has ever produced."

"In a career that dates back to the 1960s, there are few musical genres that he has not turned his adroit musical hand to, and on top of his acclaimed solo work he has graced the line-ups of several notable rock bands, Thin Lizzy, Colosseum II and Skid Row to name but three," the record label said.