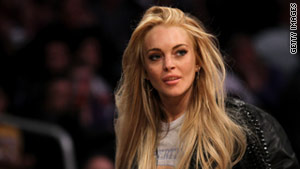 The Los Angeles County district attorney is considering a felony theft charge against Lohan after her stylist handed over the "one of a kind necklace" to police just before they were to search her apartment, according to the police and the prosecutor's spokeswoman.

"We vehemently deny these allegations and, if charges are filed, we will fight them in court, not in the press," Lohan lawyer Shawn Chapman Holley said Saturday.

Los Angeles County district attorney spokeswoman Sandi Gibbons on Saturday denied a media report that a decision had already been made to charge Lohan.

"The case remains under review," Sandi Gibbons said. "When we make a decision, we will let everyone know."

The necklace was valued at $2,500, a statement from the Los Angeles Police Department said.

"As part of the grand theft investigation, detectives with the Los Angeles Police Department's Pacific area obtained a search warrant on February 1, 2011, for actress Lindsay Lohan's Venice residence, to search for the necklace," the statement said.

Lohan, 24, is currently on supervised probation for a drunk driving conviction. The judge overseeing her case told her in October that he would send her to jail for 180 days if she violated her probation rules before her next court appearance, set for February 25.