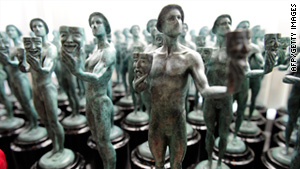 The rivalry between "The King's Speech" and "The Social Network" remains on center stage.
STORY HIGHLIGHTS

Los Angeles (CNN) -- "The King's Speech" actor Geoffrey Rush joked that the SAG awards should be called the "Uplift" awards because of the boost it gave his movie just four weeks before the Academy Awards.

The awards season rivalry between "The King's Speech" and "The Social Network" took a sharp turn Sunday night toward the film about a stuttering British monarch and away from the story of Facebook's founder.

"The King's Speech" cast was also chosen as the best movie ensemble, positioning it as the front-runner for the best picture Oscar.

"The Social Network" was the big winner at the Golden Globes, which are voted upon by the Hollywood Foreign Press Association's several dozen members. Hollywood's actors choose the SAG winners.

Natalie Portman's front-runner status for the best actress Oscar was bolstered when she was given the SAG best actress award for her portrayal of a ballet dancer in "Black Swan." Portman carried home the Golden Globe two weeks ago.

Christian Bale's Oscar odds jumped Sunday when his name was called as winner of the SAG award for best male supporting actor in a film. Bale won the Golden Globe earlier this month for his role as a drug-addicted boxing trainer in "The Fighter."

The role that won them a SAG Award

Early on in the televised ceremony, the SAG award for best female supporting actor in a film went to Melissa Leo for "The Fighter." Leo also won the Golden Globe and is nominated for an Oscar.

"I'm much better when I have my words written for me," Leo said, as she tried to hold back tears. When she was finally able to control her emotions, she said, "This has been an extraordinary season for me."

The 15 SAG categories -- the only industry honors that solely recognize performers -- include both television and film actors. The two-hour show in Shrine Exposition Center in Los Angeles aired on TNT and TBS. Both TNT and TBS are units of Time Warner, the parent company of CNN.

Al Pacino and Claire Danes continued their domination of the past year's actor awards for TV movie roles by winning their respective categories Sunday night.

Pacino, who portrayed Dr. Jack Kevorkian in HBO's "You Don't Know Jack," has now won the Emmy, Golden Globe and the SAG award for best actor in a TV movie or miniseries.

Danes has the same three actress trophies for work in HBO's "Temple Grandin."

"You didn't applaud when I turned 40," the 89-year-old White told the audience. It was the first SAG award of her career and "the biggest surprise I ever had in this business," White said.

The cast of "Modern Family" reprised their Emmy win by capturing the SAG trophy for best TV comedy ensemble.

"I lost my speech, I had it written on the other paper," best actor Steve Buscemi said during his second walk to the stage.

The SAG award for best female actor in a TV drama series went to Julianna Margulies for "The Good Wife."

The Screen Actors Guild's 47th Life Achievement Award was given to Ernest Borgnine in a tribute presented by comedian Tim Conway.