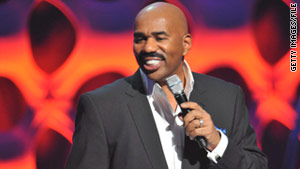 Mary Harvey has posted a series of YouTube videos on the end of her nine-year marriage to comedian Steve Harvey.
STORY HIGHLIGHTS

(CNN) -- Comedian Steve Harvey's ex-wife has posted a series of videos on YouTube about the breakup of their marriage and the bitter fight that followed.

"It's hard to put something behind that keeps popping up in your life," Mary Harvey said, pointing to an Essence magazine article this month referring to her and a lawsuit filed by her former husband.

"As I sit and talk and speak right now, there's a lawsuit that's been filed against me in Texas, because in Steve's opinion, I was responsible when Oprah didn't give him a TV show," she said. "I'm being sued for that as I sit here on this sofa today."

The three videos, which run 26 minutes, include excerpts of letters and e-mails she said she intercepted between Harvey and his current wife, Marjorie, near the end of her 16-year relationship with him.

A statement given to CNN Monday by Harvey's lawyer said: "We are appalled and aware of the videos and the other fabricated documents, which were placed on the internet over the weekend by the ex-wife of Mr. Steve Harvey, which contained false, misleading, derogatory, disparaging, malicious, explicit and slanderous information about Mr. Harvey, his current wife and others."

Steve and Mary Harvey divorced in 2005, but a bitter fight followed in which Harvey "turned my son against me, had me evicted from our house, thrown out, all the businesses, all the money, the cars," she said.

"He manipulated the courts, everything against me," she said.

Steve Harvey would not personally respond to the charges because of "existing court gag orders," lawyer Bobbie Edmonds said.

He is "taking necessary legal steps" against the ex-wife because of the videos, which he said violate court orders "which prohibit either party, their lawyers or representatives from discussing and releasing information on the internet and to the media," Edmonds said.

"We are saddened that the ex-wife has resorted to such devious and selfish behavior, with a reckless disregard for their minor son, her adult son and Mr. Harvey's other children," he said.

Steve and Mary Harvey met in 1989 and married in 1996, she said. Their son, Wynton, was born a year after their marriage.

In the videos, Mary Harvey describes the early years of their relationship as a financial struggle in which she supported his comedy career by sleeping in their car as they traveled from job to job.

The couple would sometimes survive on a jar of coins kept in their trunk, sometimes by stealing gas to make it to the next city, she said.

It was when Harvey's career was prospering that she realized "I was not alone in my relationship with my husband," she said.

"It hit me really hard" when she intercepted a love letter from a mistress on their second wedding anniversary, she said.

The letter was from the woman Harvey would later move in with and marry, Mary Harvey said.

She never got an apology, she said.

"Steve never said that he was sorry," she said. "He had our housekeeper pack his belongings up and forward those belongings to New York and after that, that was it."

The last of the three videos includes an apology letter she said Harvey's lawyer wanted her to sign.

"He wanted me to take the blame for it, in writing," she said.