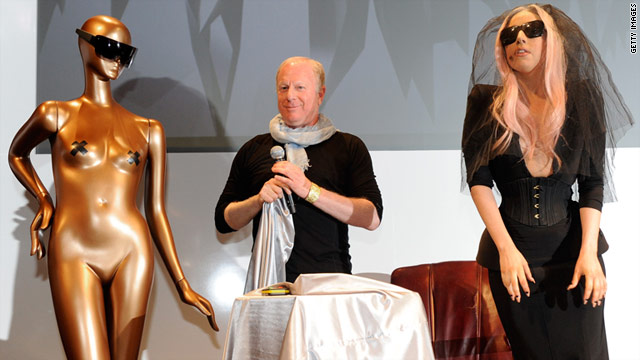 (CNN) -- During the recent Consumer Electronics Show in Las Vegas, Lady Gaga took to the stage in her role as a creative director at Polaroid to debut the company's new "Grey Label" line, which she helped conceive and design.

The unveiling was handled with typical Gaga verve: As reporters and cameras clamored about, the singer took a picture of the crowd and advised the group to "Smile, you're so f***ing famous."

It was classic superstar Gaga, in control yet unpredictable. It's also the same style that has helped her craft a career that even Madison Avenue is recognizing as a game changer.

"She has changed the way endorsement deals work," said Rana Florida, chief executive officer of Creative Class Group, a think tank that advises businesses and governments. "She's putting more of her influence, thought and creative energy into a line rather than just endorsing them."

While other celebrities have been content to shill for products, offering themselves as endorsers, Gaga is taking the reins and stamping her indelible mark on said products.

Her strategy is paying off. According to Forbes, she is expected to earn $100 million this year. That would put her in the stratosphere occupied by only a few other artists, including U2 and AC/DC.

Those are huge numbers for a big career and an even bigger star, who is managing to spread her influence culturally, artistically and even politically. Her fan base is so massive -- she calls them her little monsters -- that she has more than 7 million Twitter followers and more friends on Facebook than even President Barack Obama.

She is the first artist to have 1 billion video views online, her fashion choices (assisted by a mysterious behind-the-scenes creative team known as The Haus of Gaga) consistently create buzz. Little is known about the members of the Haus of Gaga, which includes stylist Nicola Formichetti, but Gaga told MTV, "They're my best friends. I'm not really sure what the world thinks ... but I do hear things like, 'Who is the Haus of Gaga?' and, 'Are you putting out a fashion line?' And no one gets it. It's not a commodity. It's not something that's meant to be sold."

The commodity is clearly Gaga. Women's Wear Daily reported that her magazine covers were the top sellers for 2010, most notably the July 8 cover for Rolling Stone magazine with 245,000 copies sold -- the magazine's biggest-selling issue of the year and a total that was nearly three times better than its 2010 average.

The star has used the platform she has before such a large audience to her advantage.

In September, thousands packed a park in Portland, Maine, where the singer delivered a speech urging the repeal of the military's "don't ask, don't tell" policy. Media outlets began attaching "activist" to her long list of achievements and her fans celebrated along with her when the policy was repealed in December.

While credit for the repeal can't be laid at the doorstep of Gaga, her activism has helped increase her commodity as a celebrity with a strong realm of influence.

Last year, writer Brian Solis and communications firm Vocus teamed up on a white paper titled "Influencer Grudge Match: Lady Gaga versus Bono." Solis said the study looked at the idea of popularity versus influence. While Gaga had the former in spades, he said, U2 lead singer and activist Bono wielded more influence.

Then a funny thing happened.

"Right before we released the study, we saw (Gaga) start to convert that popularity into influence with steps such as her stance on the 'don't ask, don't tell' policy," Solis said. "We see her now more than before as one who stands for issues."

Being able to influence is all about the numbers of people who can be reached and the effectiveness of the message, Solis said. For instance, while celebrity Kim Kardashian might be able to tweet in support of one of her charities and have fans give, such actions have to be more than just a one-time deal, he said.

"It's all about how you cultivate your community," Solis said. "Celebs have never shied away from causes and in many ways it's expected that they will use their celebrity to gain attention for those causes. But it's what (Gaga) does over time and how her community responds that starts the lean-over into the influence factor."

Corporations have taken notice. Gaga's partnership with Polaroid includes helping spearhead a new line for the company . The Grey Line includes a digital camera known as the GL30, a portable GL10 printer and the GL20 sunglasses containing an embedded digital camera, which were inspired by Gaga's signature shades from her Monster Ball tour.

"Lady Gaga is more than a singer and songwriter," said Scott Hardy, president of Polaroid. "She's a true artist who inspires her fans and the creative community. The relationship she has with her fans is exceptionally close and she is consistently in contact with them via social networks, making her messages accessible, authentic and far reaching."

Lest she be dismissed as merely a figurehead, Hardy said Gaga was actively involved in both the creation and development of the new line.

"Hands on is the only way to describe her involvement in the Polaroid Grey Label line," he said. "She's a close part of the working team and we take her direction. It is a much deeper partnership than just attracting new consumers. She plays an active role in the product development process."

Robert Brunner is partner and founder of design firm Ammunition, which helped bring Gaga's vision to market. He began working with the singer in 2009 for the HeartBeats in-ear headphones that are part of the Beats by Dr. Dre line.

Brunner said the singer participated in meetings, offered ideas and was committed to producing a Polaroid line that embodied the quality, style and vision she brings to the table as an artist who constantly pushes boundaries creatively.

"Some people probably think this is another 'celebrity endorsement' but it's really not the case here," Brunner said. "She has a lot of passion about the brand and takes her role very seriously. She wants to do great design, push things and build great products."

"The artists like Gaga who have made the cross-over to product development do well because they do believe in the products and are sharp business people," he added. "Other celebrities fail when it's a 'name-play' or the products are ill-conceived, and consequently they usually don't last long in the game."

Celebs like rapper/producers Sean "P.Diddy" Combs (Sean Jean fashions) and Dr. Dre (Beats by Dr. Dre headphones) have also had success in product development and Creative Class Group's Florida said that with Gaga, Polaroid wasn't "just borrowing her brand equity, but they embedded her creativity in the product design."

"They named her a new creative director of Polaroid," Florida said. "They also documented the creative process through, guess what? Polaroid shots of her and her new team of associates in Tokyo developing the new line. By lending her participation and creativity to designing the line, she immediately elevated the credibility and authenticity of the product."

Jez Frampton, global chief executive officer of the global branding consulting firm Interbrand, has not worked with Gaga but said the singer has gone beyond proving that her brand is strong and can generate significant revenue.

"I think what Lady Gaga has done is that she has learned from the example of others like a Madonna and she has very cleverly learned that, yes, it's about the music, but it's also about the fashion, it's about being in the moment and it's about getting out there, all of which she has done very well," Frampton said. "I'd say she's the consummate businesswoman."

Florida said she believes Lady Gaga has already taken her career well beyond that of a hit musicmaker.

"She has been able to successfully marry music, fashion and culture, making her a truly visual maven," Florida said. "She is her own movement."