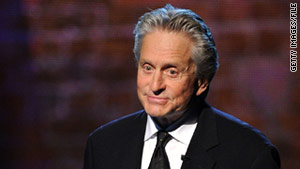 "I think the odds are with the tumor gone and what I know about this particular type of cancer that I've got it beat," he told host Matt Lauer of "Today" in an interview to air on NBC Tuesday.

"I have to check out on a monthly basis now to maintain. I guess there's not a total euphoria. I'll probably take a couple of months of getting checked out. But it's been a wild six-month ride," Douglas said in his first television interview since undergoing cancer treatment.

The experience left him with an appreciation of finite time, he said.

Douglas opens up on cancer treatment

The radiation treatment has shut down his salivary ducts for at least a year or two, and a dry mouth affects his sleep, he said. He lost 32 pounds during the ordeal, but he has regained 12 by "eating like a pig," he said with a laugh.

"I got another 20, 25 to go," he said about returning to his normal weight. He exercises at a gym, but he avoids cardio workouts because he wants to put on muscle mass, he said.

The tabloids and paparazzi have published photographs of an emaciated Douglas as he was undergoing treatment, and while Douglas said he didn't follow the coverage, friends apparently did and called him to see how he was doing, he said.

"They kept saying, 'You sure you're OK?' " Douglas said. "Finally, my father, Kirk, he came back to New York. ... He came back for 10 days and came up to the apartment every day to see me because I think that some of these photographs and, you know, who knows if they're touched up," Douglas said.

"I was gaunt," he continued. "So I think he was even concerned. And, yeah, it was not a lot of fun.

It's still not. They're (photographers) there every day."

The tabloids' chronicling of his appearance during cancer treatment was "macabre," he said.

"I guess curiosity's gotten them a lot of coverage -- sort of following it. And there's so many outlets now these days. I mean, I just feel for all these young kids. I mean, the generations now, with the amount of paparazzi that they have and these video cameras -- you know, you just can't do anything," Douglas said.

"And I resent the amount of imposition on our children, too, because it used to be at least they would try to keep them out of that, and they don't at all (now). They were having -- there was sort of a macabre enjoyment out of sort of watching me go down there for a while, I felt, by the paparazzi," he said.

As cancer put his life in jeopardy, he developed a new regard for family and friends, he said.

"All of a sudden the affection from my family, from my friends, and from my fans hit me at a much deeper level than I would have ever imagined before," Douglas said. "And it gave me a really new appreciation of just how valuable, how precious good friends are and family. And it's not that I disregard them before but there's a much deeper feeling.

"I've talked to other cancer survivors about this ... that you just really, really appreciate what's important in life," he said.

Douglas even took his three young children to a couple of his radiation treatments.

"They came into the room and they saw all the Star Wars treatment going around. And they saw them put the mask on your face because they have to kind of bolt you down like Hannibal Lecter or something," he said.

"So they can specifically target the correct area," Lauer interjected.

"So they can -- exactly, get the area," Douglas continued. "At that age it was good for them. I mean, they thought it was cool, you know, all this space age stuff. So it made up for all those days when dad was lying on the couch and couldn't get up. And their patience was really appreciated. And we've had a big celebration these last couple of days when I found out the tumor's gone."