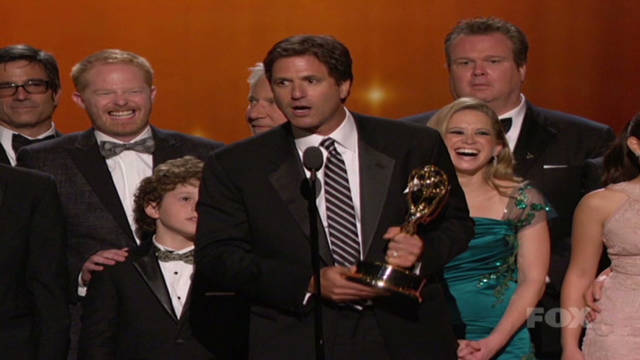 PBS' "Downton Abbey," a Masterpiece production, won the best miniseries Emmy, although HBO's "Mildred Pierce" and ReelzChannel's "The Kennedys" had a share in the acting honors.

Although cable network HBO led with the most nominations, it was broadcast net ABC that garnered the most primetime Emmys Sunday night. The wealth of trophies was spread around more than usual, with DirecTV winning two and ReelzChannel carrying one home. Fox was the only broadcast network not winning an Emmy Sunday.

Charlie Sheen delivered onstage drama when he took the stage to present the trophy for best lead actor in a comedy series, which he called "my old category."

Sheen, bounced from his hit sitcom "Two and a Half Men" earlier this year after a spat with producers, said he wanted "to take a moment to get something off my chest and say a few words to everyone here from 'Two and a Half Men.' "

"From the bottom of my heart, I wish you nothing but the best for this upcoming season," Sheen said. "We spent eight wonderful years together, and I know you will continue to make great television."

"The Big Bang Theory's" Jim Parsons won the category, ending Steve Carell's chances of winning an Emmy for his work on "The Office."

When Sheen's sitcom replacement, Ashton Kutcher, appeared with "Two and a Half Men" co-star Jon Cryer to present an award, their banter was all about Sheen.

"And I'm not Charlie Sheen," said Kutcher. "And Jon, I want to tell you something. I do not think that you are a troll." It was a reference to Sheen's public trashing of his former cast member.

The ladies competing for best lead actress in a comedy series conspired on a gag when their category was called. Each, starting with "Parks and Recreation" star Amy Poehler, walked on stage when their names were announced, lining up like beauty pageant contestants.

Melissa McCarthy, who won for her work on the CBS sitcom "Mike & Molly," said backstage that it was Poehler's idea.

While the show ended with the "Modern Family" cast onstage for the best comedy award, the sitcom also monopolized the first half-hour of the show, winning all of the first four Emmys handed out.

It was the first Emmy for each.

"I don't know what I'm going to talk about in therapy next week," Bowen said in her acceptance speech. "I won something!"

"Welcome back to the 'Modern Family Awards,' " host Jane Lynch said as the show resumed from a commercial break.

The "Glee" star is just the third woman ever to host the show, following in the footsteps of pioneers Angela Lansbury and Ellen DeGeneres.

While "Mad Men" again won the top drama award, it was practically shut out for the other categories. Despite 19 nominations, a hairstyling creative service Emmy was the only other trophy given the AMC series this year.

HBO's "Boardwalk Empire" was also shut out in the acting categories, although the drama series won seven Emmys last week at the creative services ceremony and a best directing Emmy for Martin Scorsese.

It was the first Emmy for Scorsese, who already has an Oscar from his career directing movies.

He said telling stories in a cable series "gives you more license and much more freedom" to develop characters. "You can do something really extraordinary."

Julianna Margulies, star of the CBS drama "The Good Wife," carried home the Emmy for best lead actress in a drama series. It was her second Emmy win after eight nominations.

The most unusual acceptance speech may have been delivered by Peter Dinklage when he was given the Emmy for best supporting actor in a drama series.

The co-star of HBO's "Game Of Thrones'" took time to thank Kitty, who is the sitter for his dog, Kevin. "She's an important person in my life," Dinklage said backstage.

"Downton Abbey" was the most honored miniseries, with six Emmys, including for directing, writing, cinematography and costumes. Maggie Smith, who played the Dowager Countess of Grantham, won for best supporting actress, the miniseries' only acting award.

"I got to have sex with Kate Winslet many, many times, and I didn't realize it was going to result in this," Pearce said in his acceptance.

Kate Winslet, who played the title role in "Mildred Pierce," showed a high level of excitement when she accepted the best lead actress Emmy. "I was truly extremely unprepared," Winslet explained backstage. "It comes out the way it comes out."

Barry Pepper, who portrayed Bobby Kennedy in ReelzChannel's "The Kennedys," won the Emmy for best lead actor in a miniseries or movie.