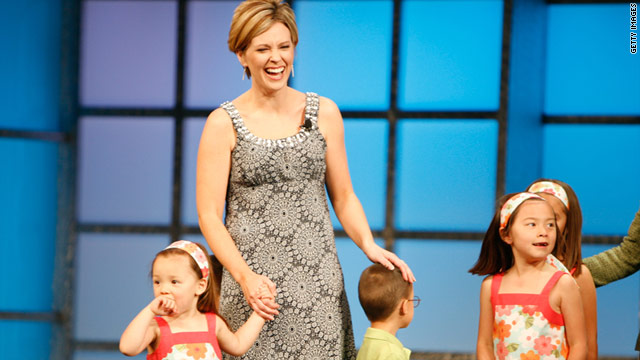 TLC announced today that they have decided to cancel the reality show, "Kate Plus 8," starring Kate Gosselin and her kids.
STORY HIGHLIGHTS

(CNN) -- TLC has decided not to renew its reality show "Kate Plus 8," the entertainment network announced Monday.

"By the end of this season Kate Plus 8 will have hit the 150 episode mark (including Jon & Kate Plus 8); an exceptional milestone," it said in a statement, which held out the possibility that the show would not die entirely. "TLC hopes to check in with Kate and the family periodically with specials in the future."

The program has featured Kate Gosselin, 36, a single mother of twins and sextuplets, as she negotiates single-parenting, taping a reality show and -- two years after her marriage ended -- trying to arrange a social life for herself.

In an interview last week with CNN sister station HLN, Gosselin volunteered no indication that the show was on thin ice. "It's going great," she told host Joy Behar. "We're still having fun. We have some pretty interesting things coming up. A little bit of stress and drama."

Behar, noting that the show was not on TLC's fall line-up, asked if it was in danger of being canceled. "I know, everybody is saying that," Gosselin said. "But I don`t control TLC's programming and I don't understand. All I need to do is do my thing on camera and then when it leaves me, I don't know what happens."

Gosselin said she does know a thing or two about fertility treatments, which led to her giving birth to six children in one pregnancy. "I will say fertility is not a perfected science," she said. "I'm a perfect example of the doctor had it under control and we ended up with sextuplets. We were shocked to death and so I just tell everyone to be extra super, super cautious."

But, she added, "I'm definitely not against it."