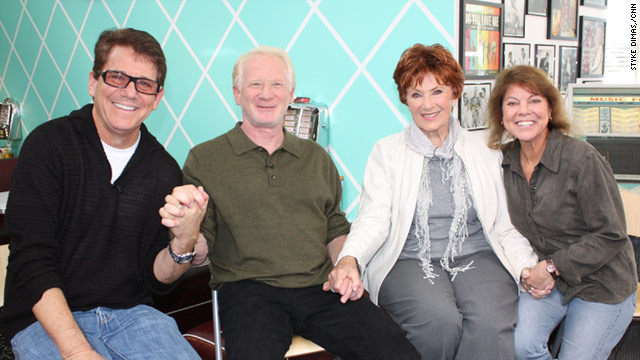 Editor's note: "Hollywood Hustle," a story about celebrity merchandising controversies, will be part of a CNN Presents hour on August 7 at 8 p.m. ET/PT.

The company, which owns the iconic show, said in a 15-page response to the lawsuit filed in Los Angeles Superior Court, that the case is "a garden-variety breach of contract action, nothing more."

"However, rather than simply seek what they are purportedly owed under their contracts, plaintiffs are attempting to generate a lucrative litigation windfall by riddling their complaint with unsupported and overreaching causes of action" for fraud and breach of good faith.

CBS said this was "all done in a transparent attempt to introduce the specter of punitive damages" in the case.

Four members of the cast -- Marion Ross, Don Most, Anson Williams and Erin Moran -- as well as the estate of Tom Bosley, sued CBS in April, claiming they have not been paid for what they're owed in connection with the worldwide sale of "Happy Days" merchandise. "Happy Days" was originally on the air from 1974 to 1984. Bosley died in October.

Under their contracts, the actors were supposed to receive 5% of net proceeds, or 2 1/2% if their images were used in a group.

In exclusive interviews with CNN earlier this year, the four cast members said they decided to move forward after discovering "Happy Days" slot machines were popping up in casinos around the country in 2008.

"When these slot machines came out, it was like Barnum and Bailey came to town," Williams told CNN. "We were bombarded with, oh look at these pictures, they'd be all over the country."

The actors said when they couldn't resolve their differences with CBS during mediation earlier this year, they decided to file suit.

The lawsuit says the show "epitomizes what is best in America with the Cunningham family exemplifying the best of what a family can be. As will be proven at trial, defendants' actions epitomize what is worst in corporate America, exemplifying the worst business practices."

However, CBS says there is no evidence of fraud, and the actors "offer no basis for their vague allegation that defendants did not intend to pay merchandising royalties to plaintiffs at the time the parties entered into the agreements."

"Instead, all plaintiffs can allege is that defendants ultimately failed to pay," which is "insufficient as a matter of law to show fraud."

The company disputed that it "concealed" its obligation to pay merchandising revenues. Instead, it said the actors "were simply ignorant of, or slept upon their own rights. That cannot serve as a basis for a fraud claim."

CBS said in a statement that the actors "are owed royalties from the merchandising of 'Happy Days' and have, in fact, been working with their representatives for some time to see that they are paid what they are due."

Neither Ron Howard, the Oscar-winning director who played Richie Cunningham, nor Henry Winkler, who played The Fonz, are part of the lawsuit.

Winkler, who told CNN earlier this year that he supported the actors in their case, said he was paid for merchandising, including his image and voice on the slot machines. He would not say how much.