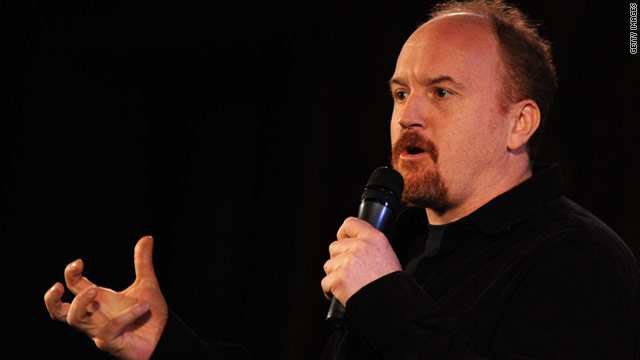 (CNN) -- Louis C.K. makes a living by saying whatever he wants.

It's an enviable way to pay the bills but one that didn't come easily for the 43-year-old comedian. He's worked hard on projects, only to see them get canceled ("The Dana Carvey Show," HBO's "Lucky Louie") or, worse yet, altered by forces outside his control ("Pootie Tang").

But after years of paying his dues, he's finally found an acclaimed project that affords him complete artistic control with no external oversight. "Louie," the television show on FX that he writes, directs, produces and stars in, will begin its second season at 10:30 p.m. ET Thursday.

CNN spoke with Louis about his recent success, the ongoing controversy surrounding Tracy Morgan's comments on homosexuality and how you can't be funny on Twitter.

CNN: How much more work do you have to do on this season?

Louis C.K.: Oh, God, I've got so much to do. I have five, maybe six, episodes shot, edited and ready to go. So I have to edit the other seven, and I was making music the last two days, just finished that. I have to fill in a little more of the stand-up spots, and then I'll just be cutting and cutting and cutting. Then I have to promote the show; that's a lot of work.

CNN: Are you feeling anxious a week out?

Louis: No, I'm busy enough to not worry. I have enough to do. I get anxious when I have to do something, because the pressure is on me while I'm doing it. But this is done. The last worry on my mind is that episode. I want people to like it, but there's nothing I can do about that.

CNN: You have even more freedom this season than last, which is saying something. What was your reason for turning "Louie" into essentially a one-man show?

Louis: I just love all these jobs. I just love doing them. And weirdly, taking it all on makes it easier for me. When I'm writing, I know I'll be there to shoot it, so I don't have to make the script such a Talmud of information for the production crew; I'm going to be doing it. And when I'm shooting, I don't have to be concerned with dropping shots or leaving things out, because I know I'm going to be editing it. All that goes together.

CNN: Aside from those obvious benefits, is there any concern of going over the top since you don't have someone to keep you check?

Louis: If I have gone over some edge, I won't know it until everybody hates the season. But I think what's kept me from doing that thus far has been a fear of the audience. I've spent so much time in my life front of audiences, and I respect audiences, and I want to reach them. I'm not one of these people where like, "Oh, if only they would leave me alone, I could make this show the way I want to." The goal of this show and everything I do is to reach people with these ideas and stimulate them. I get so much pleasure out of people connecting with this stuff. When I'm doing what I really want, it's towards an audience.

I also have Pamela Adlon, who's my consulting producer and friend. She's a big sounding board for me. There have been a few things I've been really excited about and I've sent to her, and she's said, "This is bad. You gotta know this is bad." (laughs)

Louis: No, I think I work it from the other way. "Pushing the envelope" sort of implies that you're inside the envelope with everyone else, and you're trying to find the edges on the outsides. I think of it the opposite way. I was a nerd growing up, and I'm a little antisocial and awkward. The s--- that climbs into my head is a little disturbing and strange, and it's hard to make people understand it. But I endeavor to. I'm outside the envelope trying to reach in, is what I'm saying. If I'm getting better, people like it more; that's the way I look at it. I don't look at it like I'm trying to get outside this thing I'm trapped in. I wish I was trapped in there; I'd be a millionaire.

CNN: You've said you make more money during a week of stand-up than you do in a season of the show. Does it help your work on "Louie" knowing you're not dependent on it to eat?

Louis: Absolutely. A hundred percent. It's why I got this much freedom on the show, because I was able to walk away. There's no stronger position to be in when you're setting up the terms for a TV show than, "If you guys don't wanna do this, I don't have to do this." I always had that. When they'd say, "Can we have say in the casting? It's very concerning for us to put people on the network when we don't even know who they are," my response was, "Totally. I feel the same way. Let's not do the show." (laughs) "F--- it." I get it. If I owned a network, I would never let a guy just put people on without telling me who they are. That was the position I was able to take. That keeps me very happy, yes. I love that I don't need it. I love it. All the pressure of that show is creative and wanting people to enjoy it. And that's enough. It's a huge amount of work. This job is the hardest job I've ever had.

CNN: In the wake of the Tracy Morgan controversy, you went on a bit of a Twitter rant. Is political correctness negatively altering our cultural dialogue?

Louis: I think it's always there. There are always people that get upset, and it's kind of cyclical, you know? I wasn't going to say anything about Tracy, because I just don't want the trouble in my life. You tend to get in trouble when you say stuff like that. But it stayed out there; it wasn't going away. So I felt like I had to because I live off the freedom to say what I want on stage. I didn't refute anyone's being angry. I just wanted to add my voice. I think there is plenty of people, a loud enough chorus, saying, "This kind of thing is unacceptable." When someone gets offended and they sound off about it, their issue gets a voice, so I don't think anything negative happened. The idea of how speech can hurt people and what people deal with growing up got a huge amount of airplay because of what Tracy said. So that's a positive. I just wanted to say what I thought, which was: He was joking. (laughs) He was kidding. He isn't a terrible person. He was kidding. Most of the flak I get from it is, "So you think stabbing people is funny?" OK. Go ahead and ask yourself that. That's fine. I don't know what to say to you. All that's good. All talking is good, negative and positive. Stabbing is bad; talking is good.

CNN: What are your thoughts on Twitter? You seem to use it in spurts, then avoid it.

Louis: I'd really like to be rid of it. I mean, I have a huge responsibility to everybody that works for me and gives me this job to promote it as much as I can. But if this season launches well and it feels like the show is in good shape, I might shut it down. I'm not motivated to entertain people through Twitter, so just by having Twitter and not saying anything, I make people mad. People write me, and they're like, "Why don't you f---ing entertain me?" Or they go, "Stop promoting yourself and say something funny." But I'm not a Twitterer! It's not my profession. It's not what I do. I just opened a Twitter account to tell people what's going on, and once in a while I get an impulse to say something.

I mean, Gilbert Gottfried, he's been saying a whole lot worse for years than he said on Twitter, and then when he said something on Twitter, he lost his job. He lost his livelihood! You know, it's f---ed up. Twitter is like making a press statement. It's very sober, and it's not funny, and the s--- just comes out very dry ,and people get upset.

That's what happened to Tracy. Tracy made a joke in a comedy club; that's the appropriate place to say terrible things. It's like sending somebody guitar chords and saying, "This is a song I heard. What do you think?" I don't f---ing know! Or strumming G, A, D. That's "Sweet Jane" by the f---ing Velvet Underground. That doesn't sound so good to me. G, A, D. I'm not getting it. And if you happen to be offended by the letters "G, A, D," you're going to be pissed off. And the guy's like, "No, no, you gotta hear the dude playing it and singing it." Oh, I don't know. All I heard was "G, A, D," and I don't like those letters. I was molested by a guy named Gad, so f--- you, you've offended me.