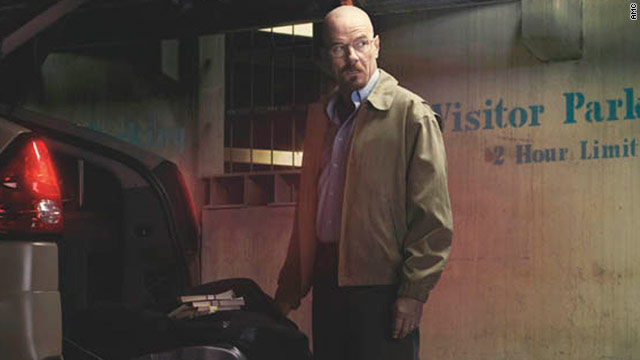 Actor Bryan Cranston is back this summer for another season of the critically acclaimed AMC series "Breaking Bad."
STORY HIGHLIGHTS

It's hot out there, and we can think of no better reason to stay indoors and out of the heat than to enjoy some of the guilty viewing pleasure on the small screen this summer.

Yes, yes, it's the season for grilling and cold drinks, but do you really want to deal with the bugs, heat and sweat when you could be diving head first into inane reality shows, teen soap operas, hilarious comedies and well-acted dramas?

We didn't think so.

So sit back and enjoy a few of our picks for some of the summer shows that will help chase your dog days away.

Ice-T: Coco a female version of me
RELATED TOPICS

Mark your calendar for June 12.

That's the day that viewers will get a glimpse into the lives of gang member-turned-rapper-turned-actor Ice T and his wife, Coco.

Judging from the interviews leading up to the show's premiere, Ice really, really does love his wife, a model well known in the world of hip-hop and men's magazines for her large ... assets.

This reality show could prove to be a hot one.

Oh how we have missed you "PLL" vixens.

Aria, Emily, Hanna and Spencer are back for Season 2 on June 14 as the search for the elusive "A" heats up. Soapy series and summertime go hand in hand, and this one -- while geared toward the teen set -- has the ability to draw viewers of all ages into its storyline.

Aliens, Steven Spielberg as executive producer and the return of hunky Noah Wyle to the small screen?

Sci-fi enthusiasts have been amped for months for this series set to debut on June 19. Set six months after an alien invasion of Earth, the series revolves around Wyle's character, a professor intent on rescuing his son from captivity and reuniting his family.

(Full disclosure: TNT is owned by the same parent company as CNN.)

Fans can think cool with some of the water sports that go on within the extreme physical challenges of "Wipeout." The contestants have the joy of going for the $50,000 prize, while viewers get to marvel at the lengths participants will go to for cold, hard cash.

Who wouldn't love a show that contestant Ananda LaBerge told the San Ramon Express that aspiring contestants should "Only go for it, if you're into pain."

Wow, it's been five seasons already?

The adventures of former operative Michael Westen and his beleaguered ex-girlfriend and fellow former spy Fioana Glennane are smart and fun, making the show the TV equivalent of a good beachy summer read.

Can you dig it?

"True Blood" returns on June 26 with even more undead action and a coven of witches set to take center stage during Season 4. We can't wait to sink our teeth into even more of this critically acclaimed show.

Bad puns aside, the series really is amazing and just seems to get better each year.

(HBO is also owned by the same parent company as CNN.)

The curmudgeon comic Larry David is back on July 10 in a new city, but with the same foot in his mouth.

David and the gang take the show on the road to New York City, which seems totally fitting given their brand of no-holds-barred, in-your-face comedy. It's been a long wait for fans, as the show's last season ended way back in November 2009.

Expect celeb guest appearances from stars like Ricky Gervais and Michael J. Fox. Perhaps the hilarity of the show will help to soothe the pain of the ending of its network mate, "Entourage," which will end its run for good with the final season this summer.

The Emmy voters can't be wrong.

The star of this riveting series, Bryan Cranston, has won the award for outstanding lead actor in a drama series consecutively for the show's three seasons. Season 4 premieres on July 17 as Cranston's chemistry teacher character, Walter White, continues to cope with his life of crime and its consequences.