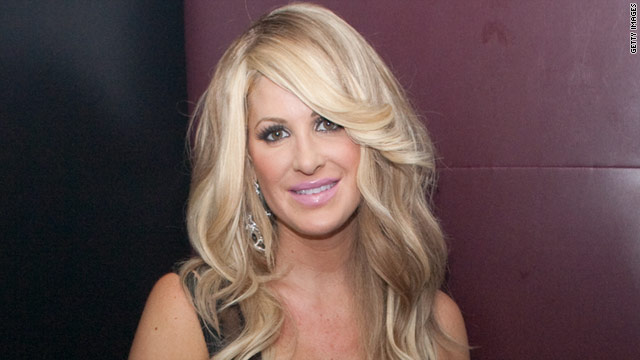 "Real Housewives of Atlanta" star Kim Zolciak announced late Tuesday that she has given birth to a boy.
STORY HIGHLIGHTS

(CNN) -- This baby was not tardy for the party.

"Real Housewives of Atlanta" star -- and aspiring singer -- Kim Zolciak announced late Tuesday that she has given birth to a boy.

Zolciak's due date was sometime in early June. And true to her single, Kroy Jagger Biermann came on time.

"@biermann71 and I are happy to announce the birth of our son today Kroy Jagger Biermann is healthy & beautiful We are so in love!" the post read.

The newborn is the namesake of Zolciak's boyfriend, Atlanta Falcons defensive end Kroy Biermann. Viewers saw the pair meet in a November 14 episode of the Bravo television show.

She has two daughters from a previous marriage.

Zolciak shot to fame for her role in the "Real Housewives of Atlanta," which chronicles the lives of six "fabulous women from Atlanta's social elite," as the Bravo website put it.

The show remains the most popular in Bravo's "Housewives" franchise. It returns for a fourth season in October.

Zolciak has tried to parlay her show success into a career in music.

She followed up the following year with the single, "Google Me."

"Research me, you'll find me. Click them keys and Google me!"