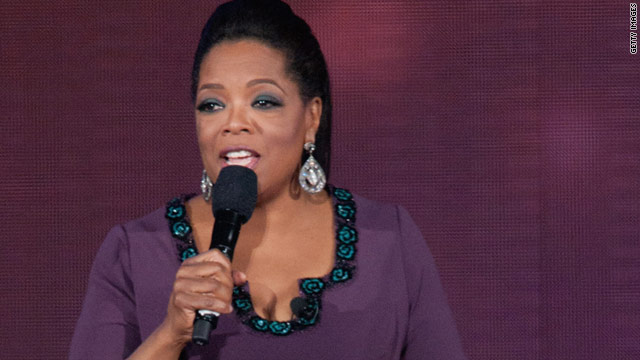 (CNN) -- Talk show queen Oprah Winfrey took her final bow in a taped episode that aired Wednesday, marking the end of her 25-year daytime talk show with a tearful goodbye.

The media mogul signed off by walking through her audience and offering an e-mail address -- oprah@oprah.com -- by which her many fans may contact her.

"I want you to know that what you have to say matters to me," she said, pledging to read as many e-mails as possible.

Winfrey said she has no regrets, though wished she could have done more to combat sexual predators of children.

She then turned to Perry, who sat beside 200 other men in the audience who were once victims of sexual abuse as children.

"They are standing together to lift the veil of shame," she said. Each man carried a photo of himself as a child.

Photos: Oprah through the years

In the end, Winfrey said her departure isn't bittersweet, but rather "all sweet and no bitter."

What's it like to work with Oprah?
RELATED TOPICS

"Every single day I came down from my makeup room, I'd offer a prayer of gratitude for the opportunity to have done this work. To be embraced by all of you, it's one of the greatest honors a human being can have," she said. "Many of us have been together for 25 years. ... So I thank you all for your support and trust in me. I thank you for tuning in every day. ... I won't say good-bye, I'll just say, until we meet again."

Beyond her studio audience, people like Funda Ray also reminisced about how Winfrey turned her daytime talk show into a televised forum for self-help.

When Ray arrived on these shores two decades ago from her native Turkey, she hardly spoke English. But she learned, went to school and even college. Today, she works as a financial adviser's assistant. And she said it's all because of Oprah.

Gayle King: "Oprah was so ready for this moment"

Ray was recording the last episode of Oprah Winfrey's show Wednesday -- she couldn't be home in time to watch. "I'm going to miss her so much," she said.

Winfrey announced in 2009 that she was leaving the show that catapulted her into a household name and made her a part of American culture and a worldwide celebrity. Even Ray's mother, who arrived from Istanbul for a U.S. visit last week, got off the plane and asked her daughter: "Do you know Oprah is retiring?"

Winfrey's popularity and credibility go hand in hand: If she gushed about a book, it became an instant best-seller. An appearance on her show was almost always followed by a rise in profile for the guest.

Paula Pervall, 44, administrative assistant at the Elmhurst House of Friendship, an assisted living home in Wheeling, West Virginia, is among millions of Oprah fans.

"I think that it's sad that the up-and-coming generation is not going to be able to experience what she offered my generation -- the self-help, the inspiration to do better," Pervall said. "She was very inspiring to people. She taught a lot of lessons."

The most important lesson? "To be the best me that I can be," she said.

Oprah has had many great people on the show, Pervall said.

She remembers the woman who had the face transplant; she was from West Virginia -- "that one jumps out at me." Another show featured someone kicked out of a West Virginia town because of HIV.

The finale aired in three parts starting Monday and featured -- one by one -- dozens of Winfrey's famous friends taking to the stage to pay tribute to the talk show host at Chicago's United Center.

Show producers kept her out of the loop about the guests.

iReporters weigh in on Oprah's impact and legacy

Winfrey, who has in the past made it clear that she does not like surprises, gasped as her celebrity friends made appearances to thunderous applause, sometimes after a clue phrase.

"Pulling off this surprise has been mission impossible," Hanks said Monday, a nod to the famous movie starring Cruise, who walked on stage right after.

Winfrey took in the scene in an arena filled with giant photographs of memorable show moments and thousands of adoring admirers.

Winfrey had kept mum about plans for the final show, leaving her fans with one last surprise.

Kathy Pittman, 55, of Columbus, Ohio, won't find out until Saturday. She'll be watching it with her daughter then, after the work week is over.

For Pittman, who is African-American, Winfrey transcended racial barriers with her talk show. She first connected with Winfrey just months after the debut of "The Oprah Winfrey Show" when the host visited Forsyth County, Georgia, a hotbed of racial tensions at the time.

Pittman was intrigued by Winfrey's courage and her confidence to put herself in the middle of a volatile situation.

Opinion: There will never be another Oprah

"No one sees her as a black woman," Pittman said. "She appeals to everyone. She showed us ... that you can do whatever you want to, that the sky's the limit."

It was refreshing to see an African-American woman rise to such enormous power and then use it to help heal the world, said Sondra Miller, 33, vice president of community engagement for Cleveland's rape crisis center.

"I think Oprah has built credibility over the years," said Miller, a subscriber to Winfrey's magazine and viewer of her show from childhood. "She takes topics with an extreme amount of stigma, like sexual abuse, and makes people OK to talk about it."

Male survivors of sexual abuse was one such topic, Miller said. Winfrey interviewed actor, director and producer Tyler Perry about his own experience and had an audience filled with such survivors. Miller thought that was remarkable.

"I don't think we ever could have imagined that happening 10 years ago," she said.

Miller was drawn to Winfrey's knack for approaching intimidating topics in a sensitive and empowering manner.

For many of her fans, Winfrey's last show was history in the making. Her show will end, they said, but her legacy is lasting.

Part of it will live on through runner Raymond Britt, 50, who first saw Winfrey at the Chicago Marathon in 1994. He had never run a race before, let alone a marathon. There was so much behind him but so far to go still -- five miles to the finish line.

At mile 21, he caught a glimpse of Winfrey, who had just run the Marine Corps Marathon, cheering on the runners. She stood alone, without an entourage, simply encouraging everyone to keep going.

"If she could do it, then I could do it," thought Britt, of Winnetka, Illinois. He finished that day and went on to run 125 more races, including 85 marathons.

"It's possible I wouldn't have finished that first one without Oprah at the 21," he said. "She inspires the human race."

And part of it will live on through Britney Deatherage, 26, of Lexington, Kentucky, who watched the shows with her mother and became a fan.

The topics were more than current events, said Deatherage, a hairdresser. They focused on "people's real lives and what they experienced."

"She's just kind of like an idol to every woman," she said, illustrating that "women can be what they want to be."

Winfrey is one of the most recognizable talk show hosts and has built a media empire, including launching her own cable television network, OWN.

"My vision for OWN is to create a network that inspires our viewers and makes them want to be who they are on their best day," Winfrey said.

As Winfrey devotees mourn the end of her 25-year run, some speculate who -- if anyone -- can fill her void.

Oz added that he is grateful for the opportunity to take over the time slot, which is among the most sought-after in TV land.

Winfrey's show made people like Dominique Taylor, 23, of Brooklyn reorient their lives. Taylor rescheduled her cheerleading practice, her voice lessons, everything around 4 p.m. so that she could be home in front of the television. Winfrey made the young woman laugh, made her cry.

Today, Taylor sees herself as an embodiment of Winfrey's show, another part of her legacy. She's a young filmmaker who hopes to involve Winfrey's production company in her project.

"Her show was a platform for so many people to tell their story, for them to know they weren't alone," Taylor said.

At 4 p.m. every day, Taylor, like millions of others, felt that she mattered.

CNN's Moni Basu and Joe Sterling contributed to this report.