For show's finale week, it's Oprah who's in for big surprises 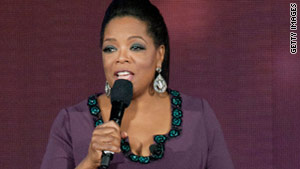 Oprah attends "Surprise Oprah! A Farewell Spectacular" at the United Center on May 17 in Chicago, Illinois.
STORY HIGHLIGHTS
RELATED TOPICS

Tune in to "Piers Morgan Tonight" for a special tribute to Oprah Winfrey. Piers talks with Gayle King, Suze Orman, Lisa Ling and more about the impact that Oprah and her show has had on American culture.

(CNN) -- Oprah Winfrey has set the bar high for surprising the masses -- whether it's giving audience members cars or bestowing fans with trips to Australia.

But the tables will turn Monday and Tuesday, when Oprahphiles will see an astonished talk show queen during "Surprise, Oprah! A Farewell Spectacular."

Winfrey was kept out of the loop about the guests for the two-show extravaganza, which was taped last week.

And while Winfrey has paid tribute to teachers, philanthropists and people from all walks of life on her show, the surprise spectactular was clearly a tribute to her legacy.

One of the most poignant moments of the taping occurred when hundreds of alumni from Morehouse College in Atlanta brought Winfrey to tears.

The men surrounded Oprah on stage, grateful for her scholarship endowment that helped them become doctors, lawyers, hedge fund managers and military officers. Each graduate carried a small light, which added up to an awe-inspiring sight when the men gathered on stage.

As Oprah devotees mourn the end of her talk show's 25-year run, some speculate who -- if anyone -- can fill her void.

Oz added that he is grateful for the opportunity to take over Winfrey's time slot, which is among the most sought-after on-air real estate in TV land.

There is no shortage of those who could be Winfrey's industry heir.

The final episode of Oprah will air Wednesday.

Winfrey was reportedly producing the final show herself and is keeping her plans secret -- leaving her fans with one last surprise.