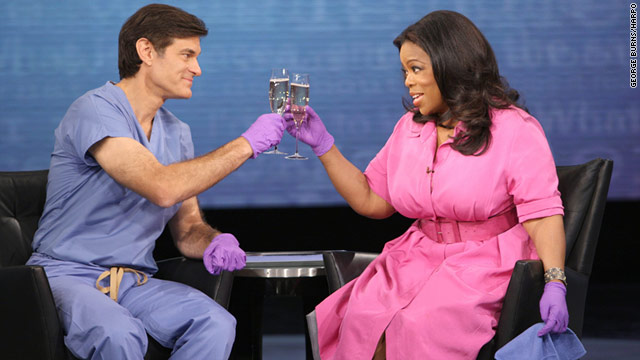 Mehmet Oz said he considers it an honor to take over time slots left vacant by his mentor, Oprah Winfrey.
STORY HIGHLIGHTS

(CNN) -- The daytime television landscape is about to look very different after the reigning queen of talk packs it in on May 25.

After 25 years that have seen Winfrey evolve from a talk show host to a pop culture icon, she has decided to stop the machine that has made her so influential.

The move has not only left her loyal fans in mourning mode, but has also resulted in a bit of speculation of who, if anyone, can fill the void.

Oz added that he is grateful for the opportunity to take over Winfrey's time slot, which is among the most sought-after on-air real estate in TV land.

Amid the loss of "The O" comes the very real business of local stations having to strategize and determine how to designate the golden hour once filled by Oprah, who with her millions of viewers offered an attractive lead-in to whatever program followed her.

"The rush is not surprising," said Larry Gerbrandt, a media research analyst who is a principal with Media Valuation Partners. "Due to the program's long-term success over time, Oprah had eventually wound up on the strongest local stations in the country ... the most desirable time slots. In many markets, these time slots have not been available for decades."

There is no shortage of those wishing to be Winfrey's industry heir.

Of course, those are just the confirmed players in the race. There has been plenty of buzz surrounding other bold names that are considering a run for the time slot.

Journalist Katie Couric is reportedly in talks to helm a daytime talk show after her contract with CBS News expires, and even reality TV star Bethenny Frankel has been rumored to be pursuing a spot at the Oprah-less table. (Frankel has declined to comment on reports, though she has been quoted as saying she would like to have a daytime talk show.)

Even former "The View" co-host Rosie O'Donnell will be aiming for some of Oprah's audience, albeit not via broadcast. O'Donnell, whose former talk show "The Rosie O'Donnell Show" ended its run in 2002, landed a new show on Winfrey's cable network, OWN, and will be filming in the same Chicago studio where Winfrey produced her show.

Bill Carroll, vice president and director of programming at Katz Television Group, told Media Life Magazine that Oprah's size-10 pumps will be hard to fill, though "all the shows at 4 p.m. [Winfrey's show airs at 4 p.m. in many markets across the country] are going to gain because we're going to have a redistribution."

"I don't think anyone can predict with certainty who will be the biggest winner; the audience will make that judgment," he said. "If you look at the show that is probably in order, I think most guess that -- an in many markets she's already there, and will move up in others -- 'Ellen' is probably the show most believe will at least get sampled by Oprah viewers. And obviously, Oprah loyalists will check out 'Dr. Oz.' "

Oz first appeared as a health expert on Winfrey's show in 2004 before she spun him off in his own syndicated show in 2009. In total across the country, "The Dr. Oz Show" will be on 150 stations as a 4 p.m. news lead-in, which he said will be more than all competitors combined following Winfrey's departure.

He said he takes very seriously the mantle Winfrey is passing on.

"Really, her legacy is the people who she's left who she's trained, and I'm blessed to be in that group," Oz said. "What you gain more than anything else is the trust of her audience. If you are going to love people, you have to give them all the news straight up and do what's best for them. She has done that throughout 25 years, and I have pledged to always make her proud of me by always doing the same."

Gerbrandt, who in addition to being a media analyst for more than 25 years has written frequently for publications like The Hollywood Reporter, said Winfrey's departure could benefit others in the wings.

"Clearly, existing shows such as 'Dr. Oz' and 'Dr. Phil,' along with all the other talkers, would like to improve their time periods and carriage," he said. "It does leave an opening for a brand-new entrant, such as a Katie Couric, to come in at the top and not have to battle her way to the best time periods and stations over a number of seasons, though Couric's tarnished star will require some serious burnishing after failing to improve CBS' 'Evening News' rankings."

Some stations, like CNN affiliate WSB in Atlanta, are opting to fill the hour with a newscast instead of trying to duplicate Winfrey's talk show success.

"We felt that this was the right time to start the additional newscast," Bill Hoffman, vice president and general manager of WSB-TV, said during an April staff meeting. "Oprah says goodbye to Atlanta and the nation on Wednesday. It only makes sense to begin serving our viewers and the community with fresh news and information the very next day instead of airing a summer full of Oprah reruns."

Karen Taylor Bass, a public relations expert and host of Black Enterprise's Web series "Brand New You," managed to score some prime tickets to one of Winfrey's final shows.

Taylor Bass said she believes that if television executives had anyone they truly believed could succeed Winfrey, that person would have already been groomed and identified as such.

"It's going to be hard to replicate brand Oprah," she said. "She really connected with the everyday person with everything from the weight battle to her success. She has that personal connection with her audience in that you feel like you are invited to her couch every day, and that took time to evolve."

Oz said any competitors will have to "earn their stripes," as fans are so loyal to Winfrey and used to her positive energy. He said he looks forward to leading into the news, as his show is a mix of entertainment and news, so he believes it will be a natural flow from one to the other.

As he headed out to tape his 63rd and final appearance on "The Oprah Winfrey Show," Oz said he too will miss having her on air daily, though he admires how she is choosing to leave.

"I'm very proud of her," he said. "It's a very brave thing to do, at the top of your game to realize that you can contribute more in other places."

"We've lost a friend next to us in the daytime lineup, but I know she's destined for greater things."