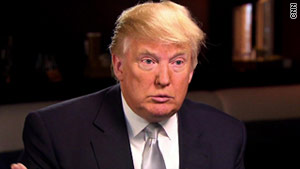 The show's "big success" is "due in part" to Trump, Bob Greenblatt said, but he predicts it can go on without him.

"If he decides to run for president and is unavailable to do the show, we will bring the show back and there will be somebody else sitting at the head of the boardroom table," NBC's Bob Greenblatt said. "Who that is, we're not even going to really entertain because I'm still hoping we will have Donald in the seat."

Trump, who has flirted with a 2012 presidential bid, is expected to make his intentions known on the final episode of the reality show's current season.

NBC has enjoyed a ratings bump from the Trump presidential buzz, Greenblatt said.

"We couldn't be happier," he said. "There may be headaches down the road but at the moment we're feeling really good about it."

While he wants Trump to be available to host "Celebrity Apprentice," Greenblatt said, "It is the right and privilege for every American-born citizen in this country to run for the highest office in the land.

"Nothing would make me happier to see somebody reach that dream," he said.