On the scene at the first 'X Factor' taping: Simon and Paula reunite 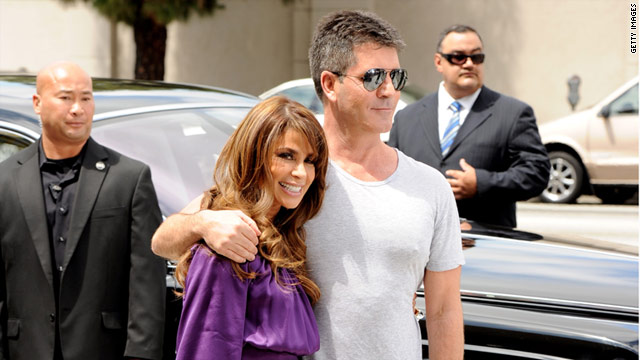 Before the judges stepped onto the stage of the Galen Center on the campus of the University of Southern California, the show's hosts, former Pussycat Doll Nicole Scherzinger and British TV personality Steve Jones, introduced themselves to the audience. "You're all probably wondering, Who the hell is this douche?" said the self-deprecating Jones, while Scherzinger danced around him.

"Steve's actually a great singer," Scherzinger said. "You wanna hear him?" The crowd cheered him on, at which point he offered to croon ... "Back for Good" by the very British group Take That. (Don't get me wrong, I'm a huge Take That fan, but I think I could have counted on one hand the people there who had any idea of what he was talking about.)

Unfortunately, it was then time for the judges to take the stage, so we didn't get to hear Jones' musical chops. "You are going to be our fifth judge," Cowell told the crowd. "You're here to tell us who you like, who you don't like. You can certainly be as badly behaved as you want, actually."

He then passed the mic to Reid, who introduced himself by saying, "To be clear, I'm not the Randy of the panel. I don't say 'dawg,' but I do judge talent honestly. I'm brutally honest. And I may not even agree with what you guys think."

He then added with a smile: "I've had more success at it than you." (That was a very interesting foreshadowing of a battle Reid would soon have with the audience. But more on that in a bit.)

It was then Abdul's turn. "I'm thrilled that you invited me back," she said to Cowell. "It's a blessing to be part of this. And I couldn't be more thrilled to have someone on the panel here also who has experienced what it's like to sit next to him... Miss Cheryl Cole."

The charming Cole then made her first statement to the audience: "I'm going to love getting to know America, and I hope you like to get to know me too. You might have to bear with the accent just a little bit, but I'm sure you'll get used to it."

From a nuts and bolts standpoint, "The X Factor" looks kind of like "American Idol," except with Pepsi cups on the table. (Cowell and Abdul seemed happy to be reunited: During one break he lovingly petted her hair.)

But one of the biggest differences was apparent the minute the first contestants hit the stage. The first act to audition was a duo (though not a very good one), comprised of two twentysomething male friends.

Reid was fairly tough right off the bat: "It looked like you guys were having a good time," he said of their rendition of TLC's "Waterfalls," "but I'm not sure you're cut out for the big time."

The talent didn't look too promising from there. The first solo singer, a 52-year-old mom who butchered "Wind Beneath My Wings," earned so many boos from the audience members (many of whom started singing "Na Na Hey Hey Goodbye") that the show's audience warm-up guy had to say, "We're going to try and steer away from the negativity" and ask them not to boo the contestants.

But the real drama surrounded the eighth contestant, a 35-year-old female rapper/singer. After she performed a Jessie J-esque rap original called "Cluck Cluck," the instant crowd favorite got a no vote from Cowell and yeses from Abdul and Cole, leaving her fate in Reid's hands.

The mogul voted no, leading to loud boos from the audience. After she left the stage, crowd members chanted "Bring her back!" at which point producers had her walk back on the stage. The judges told her she had 30 seconds to perform something else.

Her second number was even stronger, and led to an even more enthusiastic response from the crowd (who were clearly taking Cowell's "fifth judge" edict seriously).

Said a defiant Reid: "I'm changing my no vote, not because of them, but because of you." The fact remains, however, that had the crowd not demanded she be given a second chance, she wouldn't have gotten it. (You'll have to watch the show when it premieres this fall to see if she officially made it through to the next round.)

In all, Abdul and Cole were certainly the kinder mentors, while it's looking like it could be a battle between Cowell and Reid for the title of "X Factor's" harshest judge.

See the original article at EW.com.