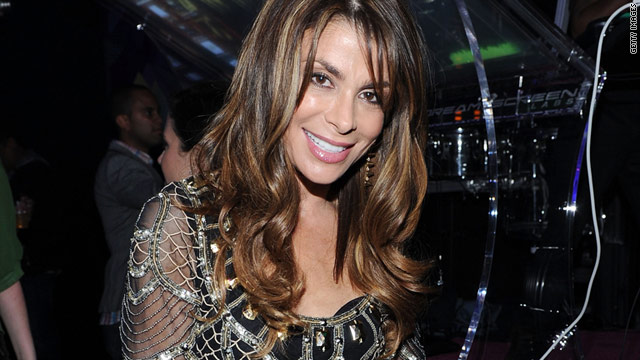 Paula Abdul said she was "delighted" to be reunited with Simon Crowel, but added to "check back with me in a week or two."
STORY HIGHLIGHTS

Los Angeles (CNN) -- Viewers who've missed the love-hate chemistry between Paula Abdul and Simon Cowell that sparked "American Idol" for eight seasons can look forward to the duo's reunion on "The X Factor" this fall.

Abdul will sit with Cowell as a judge for the U.S. debut season of "The X Factor," which, like the music competition show she left in 2009, will be on Fox Television.

"It was like finding my long lost puppy," Cowell told CNN Sunday. "After all we went through, after all the speculation, I think she found it quite nerve-wracking. I could just see the relief on her face and it was just nice to see her happy."

Cowell, who is a co-owner of the company producing the show, made the announcement at a Sunday news conference.

"I'm also delighted and grateful to be sitting next to Simon again," Abdul said. "But you might want to check back with me in a week or two."

Abdul, who is an Emmy Award-winning choreographer, also has had a successful career as a pop recording artist.

"The X Factor" is a hit British franchise that has been duplicated around the world, but only now making it to the United States.

Unlike "Idol," the show has no age limit, except for the minimum of 12 years, and it includes vocal groups as well as solo singers. Cowell says he has no idea how it will compare to his old show "until we shoot it."

"I know it will be different," he said. "I have no idea what's going to happen today and I don't want to know. It'll either be great or an incredible train wreck."

The judge's panel also will include Cheryl Cole and Antonio "L.A." Reid.

"I'm going to be an honest judge," Reid told CNN. "I love nurturing talent. I discover talent for a living."

The big prize is a $5 million recording contract with Sony Music, which co-owns the show with Cowell.