Obsessions: Getting our fill of food TV 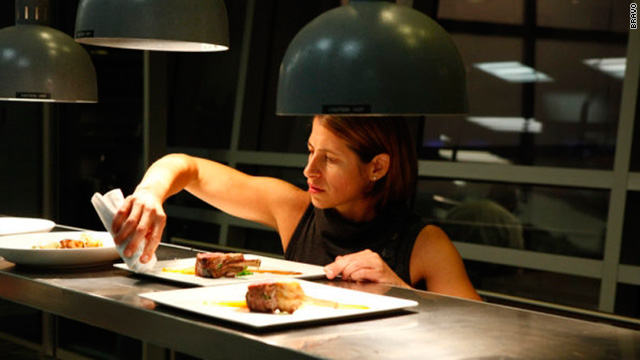 (CNN) -- Food has been a part of our TV lineup even before Julia Child's classic show "The French Chef" took off in 1963, but since then, it's become an increasingly inescapable mainstay.

Between the Food Network and Cooking Channel, the "Top Chef" franchise on Bravo, the Travel Channel's "No Reservations," "Man v. Food" and "Bizarre Foods with Andrew Zimmern, plus "Hell's Kitchen," "MasterChef" and "America's Next Great Restaurant" on broadcast networks, we're tuning in for a lot of eating and cooking.

It's not hard to understand the popularity: Production values of these shows may vary, but if they're not entertaining us with standard reality-TV shenanigans, they're exploring a topic we can all dig into. Food TV has an obvious appeal for those who want to learn more about cooking and cuisine, but it's also an easy way to chill out even if you don't.

Who among us hasn't made snarky comments through an episode of "Diners, Drive-Ins and Dives," or thought about taking up a 9-to-5 at a place akin to the bakery on "DC Cupcakes"?

On occasion, you may even be inspired to consider cooking something that requires more prep work than opening a can. And if not, repeats of "Iron Chef" -- the original preferably -- still make for surprisingly easy entertainment. And of course, if a predominant theme is even vaguely successful, you're going to see a lot more of it.

ABC unveiled a food-based program of its own at the time it announced the cancellation of long-running soaps "All My Children" and "One Life to Live." The network has tapped "Top Chef" fan favorite Carla Hall, chefs and TV personalities Michael Symon and Mario Batali, nutrition expert Daphne Oz and "What Not to Wear's" Clinton Kelly for an hourlong show called "The Chew."

The premise, as the network said, is to examine food "as a source of joy, health, family ritual, friendship, breaking news, dating, fitness, weight loss, travel adventures and life's moments." The show is expected to debut in September.

As if the news about the canceled soaps wasn't bad enough, fans griped, they had to go and replace one of them with another about food.

"Can't they take a poll or something? ... It's so sad. We don't need another food show PLEASE!" begged one, while another cryptically warned, "Pretty soon the only channels that WON'T have a show on every time spot about health, fitness, cooking, and fashion will be the Playboy Channel!"

That commenter might be on to something: About a week later, VH1 announced it was getting into the reality TV restaurant business with "Famous Food."

The idea is to drop reality TV stars Heidi Montag, Jake Pavelka and Danielle Staub along with rappers Juicy "J" and DJ Paul of Three Six Mafia, Vincent Pastore from "The Sopranos" and we're-not-sure-why-she's-still-famous Ashley Dupre into a new restaurant called "Famous Food." The competition consists of seeing who can turn the restaurant launch into a success, and the winner of this little experiment would become a stakeholder.

The question is: Why focus on a restaurant? Why not go old school and leave the cast stranded somewhere desolate, or, you know, just make them live in a house together and watch what happens? (With a mix that includes Danielle Staub from "The Real Housewives of New Jersey" and a former "Bachelor," something would happen.)

As Diane Gordon, editor-in-chief of TV site The Surf Report, puts it, "Once you're drafting someone like Heidi Montag to be on a food show, you're running out of ideas."

There are only so many TV viewing hours that one should have within a day, and your typical fan can't possibly eat up all of this food programming. Especially if it devolves into variations of the same thing.

It's not that we've had our fill of the genre quite yet, Gordon says, but rather that "it's getting harder for the producers to be creative."

"There are still shows that are enormously successful like 'Top Chef 'and 'Hell's Kitchen,' and those can't be overlooked," she says. "Part of it is aspiration; it inspires you to cook or go have a really good meal. ...It makes you want to eat better (and) it's been an education of sorts for a lot of Americans." The key, she says, is to get "people who have a different take on food that's fresh."

That might be easier said than done. Scripps Networks' three aforementioned channels (the Food Network, Cooking Channel and Travel Channel) virtually have the market cornered, not to mention the other cable channels that have beefed up as well. Between all the reality competitions, cook-off challenges and shows about eating or baking or restaurants, it doesn't always feel like there's new ground to cover. But just as important as innovation? Quality programming.

There's a reason why Anthony Bourdain's "No Reservations" and "Top Chef" are frequently repeated when discussing the cream of the food-show crop. The former offers informative storytelling with just enough fire to keep it interesting, while the latter has the drama, but only as a side dish to the main event of expertise.

Those qualities are essential, especially in competition or reality shows, says Noel Kirkpatrick, co-founder of the TV blog Monsters of Television.

"When it comes to the competition programs like 'Top Chef 'or 'Iron Chef America,' I enjoy the fact that unlike other reality programs, these shows don't rely too heavily on personality conflicts (though 'Top Chef' certainly has that) and instead is more concerned with skill and talent, which is significantly more interesting to watch," says Kirkpatrick, who's also working on a master's degree in moving image studies at Georgia State University.

So while the content has become repetitive -- Kirkpatrick questions how many "Diners, Drive-Ins and Dives" variations the Food Network could create, and for that matter, how many versions of "Top Chef" Bravo execs could dream up -- the desire to watch thoughtful, entertaining and informative food TV still exists. And there just might be an upside.

On the one hand, "the chef's job is glamorous and starry, and that couldn't be (further) from the truth," says Paolo Lucchesi, the Inside Scoop columnist at the San Francisco Chronicle. "It's a really hard, demanding job and people who do it are in the kitchen all day and not traipsing about on reality shows."

But on the other hand, this deluge of food programming has helped people to appreciate food a bit more, he says.

Food TV is "getting a little forced and tired sometimes," Lucchesi adds, but "it's hard to knock it because I think people have a better understanding about eating well. ... There's always room for innovation and education."