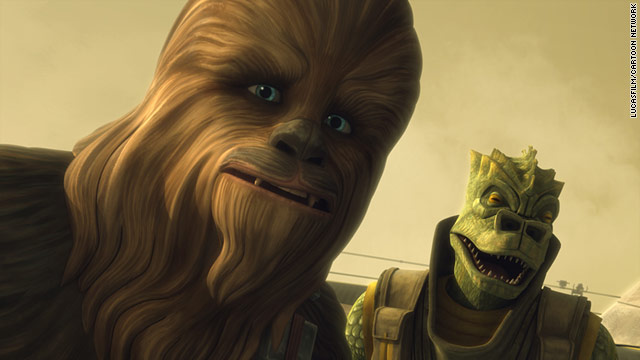 A young Chewbacca is seen here with a rather unfriendly Transdoshan, in a still from tonight's "Clone Wars" finale.
STORY HIGHLIGHTS
RELATED TOPICS

Spoiler Alert: Don't read this if you don't want to know anything about the past, present or future of Chewbacca the Wookiee. But if you don't, what kind of Star Wars fan are you, anyway?

Chewbacca, the most famous Wookiee of the Star Wars universe, is making his debut on the animated show's Season 3 finale. And this time, he's not voiced by some bear in San Diego, California, like Chewbacca was in the 1977 "Star Wars" movie (now referred to as "A New Hope.")

The original guy-in-the-hair-suit, Peter Mayhew, voices the furry alien he brought to life all those years ago, and according to him, Chewie is a little bit younger and less experienced than the Wookiee most fans are familiar with.

"You take the 'Clone Wars' Chewie and put him up against a picture of the 'Star Wars' Chewie and they're nearly identical," he said. "The magic is around the eyes, but also they got the character right."

That's probably because "Clone Wars" supervising director Dave Filoni made sure Mayhew came to the Skywalker Ranch so the show's artists could learn how the original Chewbacca walked, moved his head and made facial expressions.

"Star Wars: The Clone Wars" is an animated show from Lucasfilm and Cartoon Network (whose parent company, Time Warner, also owns CNN). It chronicles the adventures of the Jedi knights -- including a pre-Darth Vader Anakin Skywalker -- during a time of unrest in a galaxy far, far away.

The movies, "Attack of the Clones" (2002) and "Revenge of the Sith" (2005) feature action from "Clone Wars," as well, but the cartoon takes place before the latter.

"Clone Wars" has also been diving into characters from what George Lucas and fans refer to as the "Star Wars" extended universe, something Filoni is thoroughly geeking out about.

"The EU presents a ton of different ideas on all kinds of levels, and I don't think I would say there's anything that's out of bounds. But I am very careful with it because there are huge, huge fans of those things in very specific niches," he said.

"Like [the near-human Jedi tracker] Quinlan Vos was such a big deal, I thought, when we brought him out," he said.

"The interesting thing that I've come to realize is that a lot of kids' first contact with Star Wars is 'Clone Wars.' So they have a completely different point of view than like the older fans that I'll talk to at conventions. And those two groups have completely different concerns," Filoni said.

For example, many young fans of "Clone Wars" believe that the clones and Anakin Skywalker are really good guys, he said. But older fans who have seen "Revenge of the Sith" know that the ultimate betrayal is brewing. And older fans know about Luke Skywalker, Princess Leia, Darth Vader and other characters that, although are not portrayed in "Clone Wars," are tied to the events that unfold within the cartoon series.

Tonight's introduction of Chewbacca might be the first time some kids come into contact with the tall, lovable Wookiee, Filoni said.

"So now, they'll know him as this character that was on the 'Clone Wars' with the sofitano, and when they see 'A New Hope' they'll look at him and go, 'Oh, that's the guy that was with the [Anakin Skywalker's Jedi padawan, Ahsoka Tano],' which is completely different from how we older fans remember it," he said.

Mayhew, always mobbed at fan conventions, knows that today's children will love Chewie just as much as children in the 1970s and 1980s did.

"I think it's because he is so friendly," Mayhew said. "And he is a cuddly teddy bear. He's like the next door neighbor who looks after everybody. He's the big brother, the security blanket, and this appeals to a lot of people. Chewie is very special to a lot of people, and especially to me."

How Katie used "The Force"

Older fans love Chewbacca for his heroism, said Kathleen Saracen, the manager of Titan Games and Comics in Smyrna, Georgia.

"In a nutshell, he goes on to be a great hero and he dies saving a lot of lives," she said. "He gets one of the coolest deaths in the Star Wars universe. A planet crashes into him. Well, a moon, technically."

Filoni knows there are those fans who scrutinize the introduction of Chewbacca.

"When we do a character like Chewbacca and there's an immense amount of continuity going on with the icon characters like that, we have to be very careful. So in some ways the less I say about specifics the better, you know? I don't even have to get in to some of that stuff to tell the stories that I'm telling," Filoni said.

Why would some fans be so worked up about whether or not "Clone Wars" gets Chewbacca right?

"We really grew up with these movies," Saracen said.

"These were the things we turned to when we were bored or we were upset. In my case, my parents weren't home, and these were my babysitters sometimes. Certainly not every day, but I definitely watched "Star Wars" a ton when I was growing up. And I think it inhabits a place in your psyche and your heart where you sit down, you watch it and everything's OK."