Obsessions: 'Who Do You Think You Are?'

By Mark Marino, Special to CNN 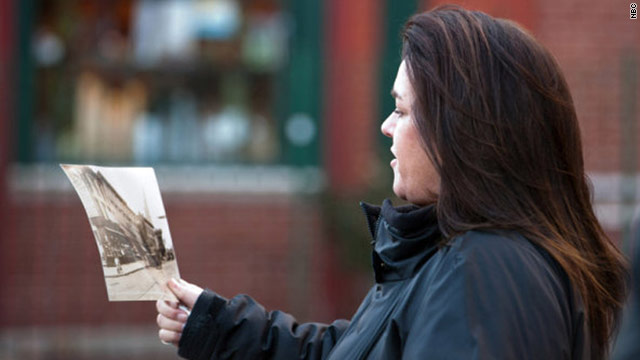 Rosie O'Donnell investigates her family tree on an upcoming episode of "Who Do You Think You Are?"
STORY HIGHLIGHTS

(CNN) -- Forget the "NCISs," the "CSIs" and even "SVU." The most suspenseful hour on television is "Who Do You Think You Are?" And it doesn't rely on bullets, blood or a Bieber cameo to deliver thrills.

For those who haven't seen the show -- and hang your head in shame if you haven't -- this Friday-night NBC reality series follows celebrities as they discover their roots with the help of family members, genealogists and historians.

Each episode of "Who Do You Think You Are?" packs more twists and turns than a week in the life of Charlie Sheen.

Last season, Sarah Jessica Parker learned that her 10th great-grandmother, Esther Elwell, was involved in the Salem witch trials. But was Esther the accused or the accuser? First, a commercial!

OK, now it's revealed that she was charged with using witchcraft to kill a woman, so Esther was sentenced to death like everyone else at that time, right? It turns out, Esther's case never went to trial because the court had been dissolved before her charges. So ol' Esther lived, and her 10th great-granddaughter would go on to play a Salem witch in the 1993 comedy "Hocus Pocus." Ain't Hollywood magical?

Each celebrity featured on the show -- including this season's subjects, Tim McGraw, Rosie O'Donnell, Kim Cattrall, Gwyneth Paltrow and Vanessa Williams -- is such a familiar face that very often, his or her journey feels like our own. And when those emotional revelations come, even the most hardened viewer is reduced to tears faster than James Van Der Beek.

In a recent episode, Williams learned that her great-great-grandfather, David Carll, was married to a Caucasian woman -- unheard of in 1870 -- and volunteered to serve in the Union Army, which was an even bigger risk because he could have been forced into slavery if captured by the Confederacy.

Williams visited the National Archives to find out more about Carll and was not only presented with a tintype photograph of him in uniform, she discovered that he was born a free man: Asked on his pension file whether he had ever been a slave, he wrote, "Never."

Whether they're finding out that George Washington once slept at their ancestor's house (McGraw) or learning that a long-forgotten relative was a bigamist (Cattrall), each celebrity's story is intensely personal and dramatic.

"They're going into their ancestral pasts and seeing exactly how brutal this planet is for human beings," said "Who Do You Think You Are?" executive producer Lisa Kudrow (yes, Phoebe from "Friends"). "It has been for a long time. If we're here, somebody suffered to make it possible."

The fascinating stories that play out each week have inspired me to look into my own ancestry, which harkens back to Naples and Sicily.

I've hit a few dead ends in my research -- maybe because my relatives' names were Americanized when they came to the States or certain records simply don't exist because they didn't exactly do things "by the books," if you catch my drift -- but I continue to dig deeper. Maybe one of my forefathers was a great painter or a renowned opera singer or, at the least, had the distinction of being named the village idiot.

And maybe, just maybe, I am somehow related to David Carll and Vanessa Williams. Stranger things have happened.