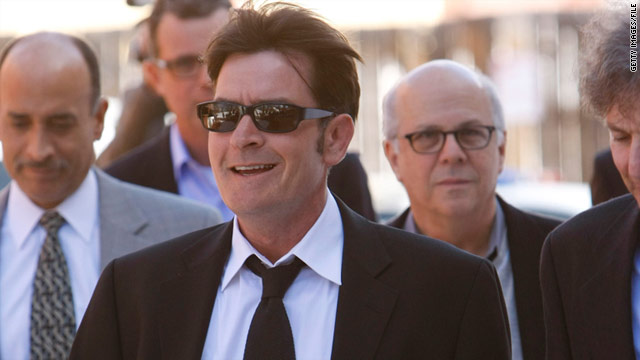 The creator of "Two and a Half Men" had Charlie Sheen in mind when he came up with the show.
STORY HIGHLIGHTS

(CNN) -- With a television show named "House" built around the character of Dr. Gregory House, you would think there would be a contingency plan just in case the actor playing House was not available.

"We have never discussed it," said David Shore, creator and executive producer of the popular Fox drama.

Getting a TV show greenlit in Hollywood is challenging enough, but what are the risks and rewards when said series becomes a hit and rests for the most part on the shoulders of one actor?

It's a conundrum exhibited in the challenges facing the production of the CBS show "Two and a Half Men." The show is on hiatus because of its star's problems with substance abuse.

For the past few weeks, actor Charlie Sheen has been thrust into the limelight, not for his talent or his hit show, which brings in millions a year, but for his hospitalization and at-home rehabilitation treatments.

Sheen -- who reportedly receives a staggering $1.25 million per episode -- recently called in to a radio show to discuss his troubles and his desire to return to work.

Sheen: I'm ready to go back to work
RELATED TOPICS

But while Sheen grapples very publicly with his demons, his high-profile unraveling also serves to highlight the difficulties that can come when a show is dependent upon a single star or talent.

Lynette Rice, a writer for Entertainment Weekly, has been covering Sheen and his recent ills.

She said the situation is a catch-22 in that the powers behind any show hope for a breakout star who will connect with the audience, but at the same time there are risks in having a series dependent on one actor.

"Do you do 'Two and a Half Men' without Charlie Sheen? No, you can't," Rice said. Chuck Lorre had Sheen in mind, she said, when he created the series about "a playboy who benefits from the presence of a child in his home" because of the actor's bad boy status. "It's not like 'Spin City,' where Michael J. Fox was replaced, oddly enough, by Charlie Sheen. You can't replace him at this point in the show's run."

This is not the first time the show has had a forced hiatus because of Sheen. In February 2010, production was halted after Sheen entered rehab.

For a production as large as his, that means scores of workers forced to wait, from lighting crew to writers. While other actors on the show such as Jon Cryer and Angus T. Jones have contracts and will be paid, there was some question as to the compensation of crew members who are considered freelance workers until Sheen stepped in recently and offered to pay their salaries.

Jen Grisanti, former head of current programming for Spelling Television Inc., is a veteran of television shows like "Melrose Place" and "Beverly Hills 90210."

Grisanti, who is also the author of the book "Story Line: Finding Gold in Your Life Story," said she has had experience working with difficult and troubled actors, and the network's main concern is in making sure the star gets healthy.

"My hope is that Charlie gets well and that he and his family recognize the stakes in something like this," she said. "When you are talking about other people's livelihoods, you have to do what needs to be done to take care of yourself, because it isn't just about you; it's about hundreds of people."

While Sheen's case may be unique in the scope of headlines it has produced about his personal life, it is not as if actors closely identified with their characters haven't been replaced before.

In the 1960s, back problems for actor Dick York forced him to leave the popular show "Bewitched," and he was replaced by Dick Sargent without any explanation to the audience.

When actor John Ritter died after the first season of the ABC sitcom "8 Simple Rules," he was replaced by David Spade before the show was canceled following its third season. The NBC sitcom "NewsRadio" was canceled soon after the death of its star, Phil Hartman.

"When an actor has an addiction gene, you know what you are getting into when you start the show," Katz said. "You know you have an incredibly talented guy who people want to watch but who also happens to have an issue.

" 'In the ninth and the 10th year, he's going to have some issues, and there's going to be some stoppages,' " Katz continued. " 'He's going to go away, and it's going to cost us some money.' I think every single executive would still sign on to do the show."

"House" creator Shore said that although the show does revolve around the character of Dr. Gregory House, played by Hugh Laurie, he considers it more of a collaborative effort given that so much of the storyline revolves around that character's relationships and interactions with others.

That is not to say that there's not a great deal dependent on Laurie.

"There's a very practical challenge in that we are working Hugh Laurie's ass off," Shore said. "He's in a hell of a lot of scenes that we shoot every week. Creatively, the tricky thing is in keeping it fresh, but I think that's probably a challenge in any show: finding new ways to explore the mind of this man."

So does Shore worry about his star burning out with so much responsibility?