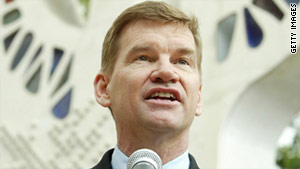 (CNN) -- Ted Haggard, the former megachurch pastor and former National Association of Evangelicals chief whose career was undone by a sex and drugs scandal in 2006, will appear in a cable TV special this month.

"Ted Haggard: Scandalous" will explore his fall from grace, he said. "It shows the drama and the intrigue" that exploded following revelations that he had engaged in sexual encounters with a male prostitute and purchased crystal meth. Haggard described the scandal as "highly embarrassing and shameful for me."

The show is scheduled to air on TLC on January 16.

But the special goes further than the scandal, he said, documenting Haggard's attempt to build a new ministry in Colorado Springs, Colorado. "It's the resurrection story," he said. He likened his journey to NFL quarterback Michael Vick and former New York Gov. Eliot Spitzer, co-host of CNN's "Parker Spitzer," both of whom endured scandal but have recently returned to the public eye.

Haggard's St. James Church in Colorado Springs, Colorado, has 300 congregants, he said, a far cry from the thousands who heard him preach in his heyday at crosstown New Life Church.

The church, which is not affiliated with any denomination, opened its doors in June.

"All are welcome. Whether you're a Democrat, a Republican, gay, straight, bi-(sexual), tall, short, addict, recovering addict. ... I believe Jesus' arms are open to all," Haggard said at the time.

This is not the first post-scandal TV show Haggard has appeared in.

The 2009 HBO documentary, "The Trials of Ted Haggard" revealed the financial hardships his family was facing after his ouster from New Life Church. Haggard said he's still struggling financially.

"We're still living on the equity of our home," he said.