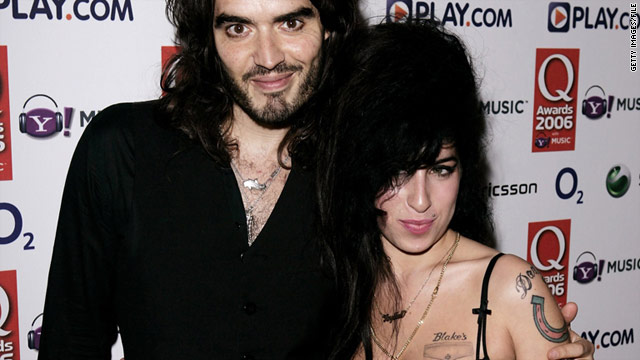 Russell Brand said he had known Amy Winehouse, who he said was a 'genius,' for many years.
STORY HIGHLIGHTS

(CNN) -- Actor and comedian Russell Brand has led the tributes to singer Amy Winehouse following her sudden death at the weekend, and called for a change in how society treats those with alcohol and drug problems.

"We have lost a beautiful and talented woman," Brand wrote in a column for Britain's Guardian newspaper, describing Winehouse as not just someone who was "all eyeliner and lager," but a "genius," a "portal for this holy sound."

Winehouse, 27, was found dead at her home in London on Saturday. The cause of her death is unknown, pending the results of an autopsy, but she had fought a long-running and well-publicized battle with drink and drugs.

Brand, himself no stranger to addiction, called for the death of his friend to spark greater understanding of those with alcohol and drug problems.

"Not all addicts have Amy's incredible talent. Or Kurt's or Jimi's or Janis's, some people just get the affliction," he wrote in the article, referring to other members of the so-called '27 Club' -- musicians who have died at the age of 27.

"All we can do is adapt the way we view this condition, not as a crime or a romantic affectation but as a disease that will kill. We need to review the way society treats addicts, not as criminals but as sick people in need of care."

Winehouse's troubled history was reflected in many of the profiles, obituaries and tributes in the British press on Monday.

In the Independent, Sophie Heawood wrote of the combination of raw talent and self-destructiveness which made Winehouse a favourite of the British press.

"Surprisingly, the tabloid reports were not unduly sensationalist -- she really was that much of a mess. But she was also hysterically funny, with a razor-sharp London wit and a shocking line in politically incorrect putdowns and deadpan one-liners. She was sharp; had a way with words, as well as song. And, oh boy, the songs."

Music critic Alexis Petridis wrote in the Guardian of her transformation once drug addiction and alcohol abuse began to take their toll, after the success of debut album "Frank"in 2003.

"She reappeared virtually unrecognizable, emaciated, covered in tattoos, dressed like a cartoon of a 60s girl group vocalist in the throes of a breakdown, complete with a vast, chaotic Ronnie Spectorish beehive that she claimed rose or fell in height according to the bleakness of her mood."

But her talent and most of all her distinctive, soulful voice won praise from all quarters.

Gordon Smart, showbiz editor of the UK's Sun newspaper, told of his first meeting with Winehouse in 2004, when she had already seen early success with her debut album, Frank.

"She had the mouth of a trucker combined with the voice and presence of a soul diva," he wrote. "It was an enchanting combination."

Fans and friends alike also took to Twitter to express their sadness at Winehouse's death.

"She was my musical soulmate and like a sister to me," wrote Mark Ronson, who collaborated with the singer on hit "Valerie" and on the "Back to Black" album. "This is one of the saddest days of my life."

His thoughts were echoed by fellow "Back to Black" producer Salaam Remi, who tweeted: "I didn't hear a gunshot... I don't see any blood, but I feel a deep pain in my heart. A part of me died today. RIP."

Singer Lily Allen said news of Winehouse's death was "beyond sad," adding: "she was such a lost soul, may she rest in peace."