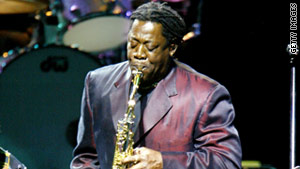 Clemons had played sax in Springsteen's E Street Band off and on since 1972.

"Clarence lived a wonderful life. He carried within him a love of people that made them love him. He created a wondrous and extended family. He loved the saxophone, loved our fans and gave everything he had every night he stepped on stage," Springsteen said in a statement.

"His loss is immeasurable and we are honored and thankful to have known him and had the opportunity to stand beside him for nearly 40 years. He was my great friend, my partner and with Clarence at my side, my band and I were able to tell a story far deeper than those simply contained in our music. His life, his memory, and his love will live on in that story and in our band."

Clemons played on such classic hits as "Born to Run" and "Thunder Road" and is widely credited with helping to shape Springsteen's sound.

He passed away at a hospital in Palm Beach, Florida, where he had stayed ever since suffering a stroke last Sunday, said a spokesperson for Springsteen and the E Street Band. He was surrounded by members of his family, including his wife, Victoria, according to the spokesperson.

Standing at more than 6 feet tall, Clemons was affectionately known as the "Big Man" to fans. He published his autobiography "Big Man: Real Life & Tall Tales" in 2009 and suffered some health problems in recent years.

In addition to his career as a musician, Clemons also worked as an actor, appearing in the TV shows "The Wire" and "The Simpsons" as well as the films "Bill & Ted's Excellent Adventure" and "New York, New York."

Tributes to the musician began to pour in on Springsteen's Facebook page Saturday night.

"RIP CC, you were the heart and soul of the E Street Band. Thank you for all the music, you got me through some dark days. Blessings on your journey," one post read.

"I just can't imagine that space on stage not being occupied by the big man. We are all better people having been moved by your huge music. Now go play with Louis, Miles and the rest and have a blast," read another.