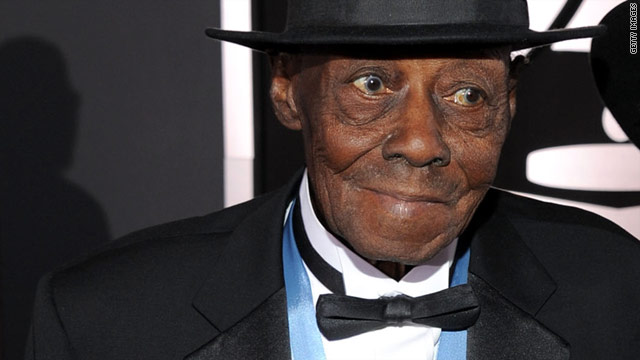 "It is with deep sadness that we announce Pinetop Perkins passed away," the web page said.

The Recording Academy Lifetime Achievement Award winner scored solo success late in his seven-decade-long career, releasing 14 albums between 1988 and 2010. He was the oldest person ever awarded a Grammy.

Before Perkins stepped into the spotlight, he played in Muddy Waters' band for 12 years, starting in the late 1960s.

"In 1980, Pinetop and other members of Muddy's crew struck out on their own and formed the Legendary Blues Band," according to his online biography.

He was born Joe Willie Perkins in Belzoni, Mississippi, on July 7, 1913.

"Pinetop started out playing guitar and piano at house parties and honky-tonks," his biography says, "but dropped the guitar in the 1940s after sustaining a serious injury in his left arm."

The Recording Academy, which presented Perkins with his lifetime Grammy praised the bluesman.

"Whether performing solo or jamming with other notable talent, his charisma and energy stood out in every song," said Neil Portnow, president and CEO of the academy. "His legacy has informed and inspired so many generations, and will continue to do so for many more to come."