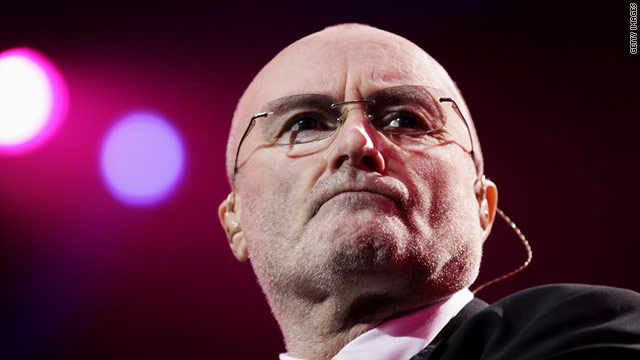 Phil Collins, who has sold more than 150 million records, says he is retiring because he wants to spend more time with family.
STORY HIGHLIGHTS

(CNN) -- Phil Collins, the man behind 1980s albums such as "No Jacket Required," has announced his retirement from music, but no straitjacket required, he says.

In a statement on his website, the 60-year-old dad said he is retiring to devote more time to his family and be a full-time father to his two young sons.

His statement was a bid to clarify recent media speculation, which he said painted him as battling health issues and feeling like an outsider in the music industry.

The articles painted "a picture of me that is more than a little distorted," he said on his website. "None of this is true. Thanks ... But there's no need for the straitjacket!"

The actor, pop star and former Genesis drummer said he was surprised by the articles because he had not talked to the media for months.

Collins has sold more than 150 million records in his 40-plus years in the music business.

He cited an example of his album released last year, which topped the U.K. charts.

"I'm not stopping because I don't fit in, this was proved with "Going Back" ... doing incredibly well worldwide. I'm not stopping so I can dive full time into my interest for the Alamo."

That last reference is aimed at comments he has reportedly made claiming to see spirits in modern photos from the fort, and to have spoken with a psychic who told him he was reincarnated from a man who fought in the battle.

But he does have a huge collection of memorabilia from the battle stashed at his Switzerland home.

"Some of the things mentioned above have been said by me in various interviews, but said as asides with a smile on my face and in passing. They were not meant to be headlines, they were small parts of a conversation," he said.

He said the reports have made him "sound like a tormented weirdo who thinks he was at the Alamo in another life, who feels very sorry for himself, and is retiring hurt because of the bad press over the years."

None of that is true, he said.

The British singer and drummer has also written songs for the Disney feature films "Tarzan" and "Brother Bear."