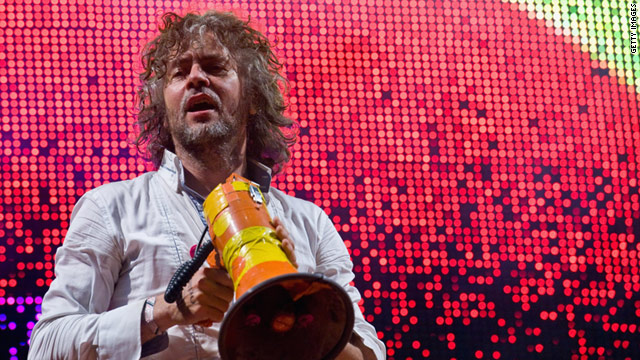 (RollingStone.com) -- When the Flaming Lips took the stage toward the end of the annual Tibet House benefit show at Carnegie Hall last night, there were none of the mirror balls or laser beams that typically end a Lips show -- but the band had a different surprise in store. After a stunning take on rarely played "Soft Bulletin" track "Feeling You Disintegrate," frontman Wayne Coyne invited composer Philip Glass to the stage's grand piano. "We've been rehearsing with him all day," Coyne said. "And he's pretty f--ing cool."

The band kicked into a slow, hushed version of their classic "Do You Realize?", Coyne strumming his acoustic guitar, the body of which was connected to a green bubble. Late in the song, Glass took over with a spiraling piano line that vaguely hinted at the Lips' melody while guitarist Steven Drozd slowly added chilling touches of reverb. Coyne looked visibly moved and stopped playing entirely, closed his eyes and raised his fist, grinning.

"Playing with him is how playing with Syd Barrett must have been," Coyne said after the performance, "Changing something just as you're catching on. And that's exactly what you want."

This year marked the 61st anniversary of the 1950 Chinese invasion of Tibet, and the benefit -- which also featured Patti Smith, Michael Stipe, Taj Mahal and the Roots -- is in its 21st year. The show kicked off with several Tibetan monks in robes chanting in front of a large painting of the region's sprawling Potala Palace.

The Roots were the first performers to bring the entire audience to their feet when they were joined by Angelique Kidjo for a rousing "Move on Up." Their peak was their take on Neil Young's "Down by the River," a reprise from their Carnegie appearance last month at a Young tribute show. Guitarist Captain Kirk Douglas took center stage, wailing on his Gibson SG and throwing in riffs of "Hey Joe" under Young's lyrics.

R.E.M. aren't touring off "Collapse into Now" (out March 8th), but Michael Stipe looked thrilled to be onstage. He debuted two never-performed R.E.M. songs: "Saturn Return," off 2008's "Reveal," which he performed standing behind the piano, and gorgeous new "Collapse" track "Everyday is Yours to Win." He told the crowd he had only played the song in bassist Mike Mills' living room in L.A. two weeks earlier, but it sounded like an R.E.M. classic.

Last year, Iggy Pop made a scene stage diving into the relatively stiff Carnegie crowd as Smith watched from the side of the stage. This year, she gave the most aggressive performance, beginning with the Youngbloods' "Get Together," which sounded like more of a plea than ever, and then kicked into an apocalyptic take on Buddy Holly's "Not Fade Away." Her band grooved on the raucous Bo Diddley beat while Smith gave an impassioned speech that proved she's been glued to the news lately.

"In Cairo and Wisconsin.... the people are taking to the streets, taking the power!" she yelled. She also cited recent mysterious incidents -- thousands of blackbirds falling from the sky and dead fish washing up in Arkansas -- saying, "Mother Nature is calling with such anguish. We must find a way to show love, because if you don't show love for Mother Nature, she will fucking take you down!"

At the after party at New York's Gotham Hall, Coyne clutched he scarves he wore during his performance. He was still beaming from playing with Glass. "There's a vulnerability to the song, and I think he knew that," Coyne said. "That vulnerability makes all the difference. That makes it believable and makes it seem like anything can happen."