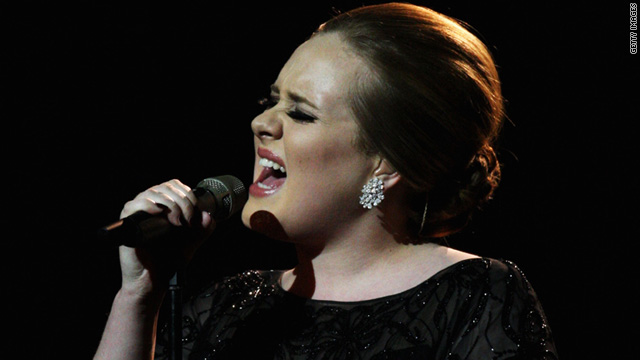 Adele is the name on the tip of every music lover's tongue since the release of her album, "21."
STORY HIGHLIGHTS
RELATED TOPICS

"At its best, '21' is that rarest pop commodity: timeless," said Entertainment Weekly's review, while the Los Angeles Times commented that "'21' shows that Adele is towering in the same landscape where some of her contemporaries, beehived or not, have lost all their bearings."

The album, which was released in the United Kingdom on January 24, has already hit No. 1 in 14 countries, as Billboard magazine pointed out on a January cover featuring the singer. The UK's Guardian noted earlier this week that she made history as the first artist since the Beatles to have two top five singles and two top five albums in the charts at the same time. (Adele's debut, "19," was released in 2008.)

If you've heard her voice -- and you likely have, considering that "Rolling in the Deep" plays in the background of an "I Am Number Four" trailer that steadily promoted the film up to its Feb. 18 release -- it's not hard to understand the obsession.

NPR's music editor Stephen Thompson throws out descriptions like "timeless" and "booming" when speaking of her sound -- the kind of voice that can bowl you over with its intensity.

When Adele stopped by NPR for a "tiny desk" concert, where she performs at the desk of a host, Thompson said even someone unfamiliar with her was won over by the ease with which she turned into a full-fledged performer.

"She's a rare case of an artist where she can breeze in, sit down and just knock everybody out. On top of the quality of the songwriting, there's just an indefinable charisma and power to her voice. It was so obvious that there didn't need to be anything to mask it," Thompson recalled. "There wasn't an issue of production...there was nothing dressed up about it...She never even took off her gloves."

That raw, emotive quality is part of what makes calling Adele a soul singer seem so natural. Even she admits becoming overwhelmed by emotion while performing.

But SiriusXM's Larry Flick says he'd categorize it as "a pop record with soul leanings." Flick, who hosts "The Morning Jolt" show on SiriusXM's OutQ channel, discovered Adele's "Hometown Glory" in 2007 and introduced her to his audience with "Chasing Pavements." He believes that one can call Adele "a soul singer if you're willing to categorize someone like Van Morrison as a soul singer, in that they both deal in very traditional, classic pop song structure, but they have these very unique, soulful voices."

Flick adds,"part of what makes them interesting is the intensity of their performances, and there's no other word to slap on that but soul."

It's the same label that has been applied to fellow Brit Estelle, whose 2008 album "Shine" had a Grammy-winning single (her collaboration with Kanye West, "American Boy") and also added her to the roster of soulful UK singers that Americans couldn't get enough of.

She was joined there by Duffy, whose Grammy-winning album "Rockferry" was released in the United States in 2008. "Warwick Avenue," the resolute single about moving on from a relationship, was one of the album's songs that Newsweek singled out as "without any guile or cheese, sung with smoky vocals and a powerful, lifting, heartbreaking crescendo."

And before that, of course, there was Amy Winehouse. Her own time-warped sound on "Back to Black" was itself following a trail of other imported old souls like Joss Stone.

Characterized by affecting vocals and nostalgic production, it seems every so many years, we're having another love affair with these modern takes on the music of our past. Between Adele and a forthcoming U.S. album release from Londoner Eliza Doolittle, who cites Stevie Wonder, Otis Redding and Queen among her numerous influences and can't seem to escape comparisons to Lily Allen, it doesn't look like our infatuation is going away any time soon.

As evidenced by the string of singers, male and female, who have adopted this frame to create modern updates, it's the kind of sound that's hit a stride in pop culture. "You get a very, very fresh, robust, almost 3-D production that makes that music sound as new as it is," says NPR's Thompson. "But if you were around in the 1960s and listened to a lot of classic soul, it sounds sort of comfortable and familiar and classic and the way music should sound to you."

Logically, says Billboard's editor Danyel Smith, "all those young women come from a similar tradition; they're all soulful singers." With Adele, an obvious influence is the Northern soul movement that developed in the northern part of England in the '60s and '70s, inspired by the music that was coming out of the States at the time. The cultural shift was evident at nightclubs like the Twisted Wheel, and could be heard in the music of the famously soulful songstress Dusty Springfield. (Remember "Son of a Preacher Man"?)

"A lot of people are quick to say that Northern soul was influenced by Motown, but really what a lot of the people in England were influenced by were the soul labels coming out of the United States at the time; the soul music that wasn't as popular as Motown was. That's what they really responded to and built their culture around," Smith explains. "That music, the 1960s soul that wasn't Motown. Who in America even talks about that? But it did exist, and it was incredible. There was a whole family of labels, and little nightclubs where everyone who didn't get to be Diana Ross played. This is what they were listening to in the UK, and this is what influenced this Northern soul movement that Dusty Springfield came out of back in the '60s and '70s."

Characterized by affecting vocals and nostalgic production, it seems every so many years, we're having another love affair with these modern takes on the music of our past.

All of the artists who have worn the world-weary label have acknowledged how these classic sounds impacted them. Adele has said that she fell in love with Etta James and Ella Fitzgerald; Duffy told Newsweek back in 2008 that it was a childhood spent listening to Sam Cooke; and as Estelle once explained to the New York Daily News, "We're fans of that tradition, and we've studied it. But we're a step removed. We're bringing to it our own struggle, beliefs and pain."

And is it any coincidence that some of the standout songs from these artists deal with one of the most universally felt and emotional of topics: Matters of the heart?

But here's the thing -- while you certainly can, as we already have, categorize these singers into one group, the reality is that they each bring such unique qualities to this continuing tradition.

"We have to group them together because there's the pop of the snare, and the little bit of griminess in the voice and the singing from the heart," says Billboard's Smith. "But all of those women, Eliza, Amy, Adele -- while they do come from the same tradition, they're all very much individuals. We have to see a little bit for Eliza, but I think that's why Amy has the following she has still, even though she hasn't had a record out in a minute."

And when it comes to Adele, particularly with "21," it's less about her reimangining of tradition and more about her ability to sing with a room-filling authenticity.

"You can deck out in beehive hairdo's all you want, but if the words don't connect with the listener on a visceral level, where the singer seems to understand the gravity of what's being sung, then it's just fashion," says Thompson. He notes that could be why people seem to be connecting so well with Adele, because of the way she can sing a ballad with "a warmth and emotion behind it that's extraordinarily believable."

At the end of the day, while you can hear the influence of Northern soul, you also hear everything from Aretha Franklin to Sade and maybe even Bette Midler, Smith points out. It seems that what this artist really brings to the table is a back to basics approach to music.

"We're at the point where listeners are getting so tired of synthetic, manufactured voices. If you listen to '21,'...It sounds like there's no effect on her voice, much less autotune," Sirius/XM host Flick says. "People are just refreshed by hearing someone who can sing. She's not bending one word to sound like 25 syllables; she's counting on what she feels to be soulful enough for the song."

Hopefully, he adds, "the new trend is going to be toward great singing and great writing. It used to be that you couldn't get a deal if you couldn't write, play or produce. I think Adele takes us back to [that] idea."