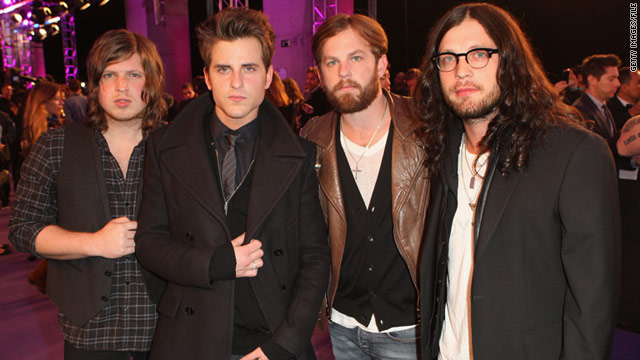 The Kings of Leon will postpone tour dates in Australia and South Africa.
STORY HIGHLIGHTS

(CNN) -- The Kings of Leon could perhaps 'Use Somebody' to hit the skins after their drummer's surgery forced the band to delay its March tour of Australia and South Africa.

"The Frontier Touring Company regret to advise that the Kings Of Leon tour has been postponed from March 2011 to November 2011 to allow drummer Nathan Followill to recover from surgery for a torn right labrum and bicep," Frontier's website said.

"A new itinerary is currently being secured for November in Australia and will be advised to fans this week. Ticket holders should hold on to their tickets until further notice."

"Sorry to all the fans in Australia and South Africa," Followill tweeted. "My bum wing needs more time to heal but we'll be back later this year. Sorry again."

Brother and lead singer Jared Followill -- suddenly with time to kill -- asked for suggestions on his Twitter account.

"Well, I now have March off," he tweeted. "Any ideas for fun? I could always fly down to Australia and party anyway. I need some sun."

This is the second time the band has run into problems during its global tour to promote their latest album "Come Around Sundown."

The band's tour bus caught on fire at the O2 arena in London just before Christmas. There were no injuries.

And last week, KOL got into a media shouting match of sorts with the creator of the hit TV show "Glee."

In an interview with the Hollywood Reporter, the show's creator Ryan Murphy said he's miffed at the rockers for refusing to let the cast sing the hit "Use Somebody" on the show.

"F-- you, Kings of Leon," Murphy says in a tirade against the band. "They're self-centered a---s, and they missed the big picture. They missed that a 7-year-old kid can see someone close to their age singing a Kings of Leon song, which will maybe make them want to join a glee club or pick up a musical instrument."

"This whole 'Glee' thing is a shock to us. It's gotten out of hand," guitarist Caleb Followill told CNN in a statement.

"At the time of the request, we hadn't even seen the show. It came at the end of that record cycle, and we were over promoting (the song)," Caleb Followill said. "This was never meant as a slap in the face to 'Glee' or to music education or to fans of the show. We're not sure where the anger is coming from. We just said no to a license for a TV show, which we do a lot."

The Kings of Leon has achieved tremendous success in recent years, scoring a multi-platinum album and several hit singles with their 2008 album "Only by the Night."