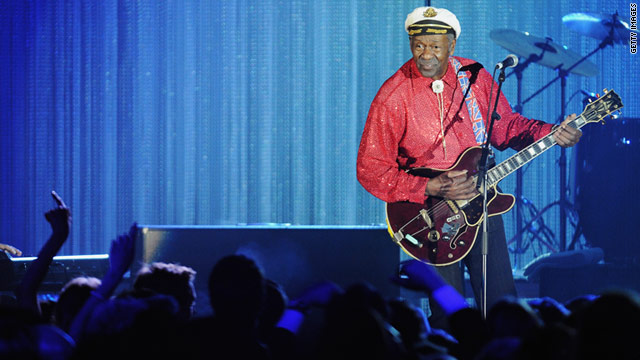 A spokesman for Chuck Berry said the performer "is fine" and that he has returned to his home outside St. Louis.
STORY HIGHLIGHTS
RELATED TOPICS

(CNN) -- Rock and roll icon Chuck Berry collapsed on stage during a Saturday night performance in Chicago after refusing medical attention earlier in the evening, a representative for the musician and the Chicago Fire Department said.

"He collapsed due to exhaustion, he then came back out to the crowd and did his 'duck walk' dance before leaving for the night," Andy Riesmeyer of CMG Worldwide, an agency that represents Berry, said in a statement Sunday.

Berry was unable to complete the show, Riesmeyer said.

Riesmeyer said Sunday that Berry, 84, "is fine" and that he has returned to his home outside St. Louis.

Late Sunday afternoon, Dick Alen, an agent from WME, which also represents Berry, told CNN that he "spoke to (Berry) just now. He is home in St Louis and sounds good and energetic."

But Berry said he didn't want to go to the hospital and signed a refusal of service form, Roccasalva said.

Roccasalva said he could not discuss the specifics of Berry's condition.

The singer and guitar player, who was inducted into the Rock and Roll Hall of Fame in 1986, has penned such classics as "Johnny B. Goode," "Roll Over, Beethoven" and "Brown Eyed Handsome Man."